GET OUR MONTHLY NEWSLETTER
Immunopaedia > Breaking News > What role do CD137L and CD4 T-cells have in B-cell lymphoma immuno-surveillance?

What role do CD137L and CD4 T-cells have in B-cell lymphoma immuno-surveillance?

During B-cell development within the germinal centre, B-cells can go through multiple rounds of both proliferation and mutation. Some of the mutations these B-cells accumulate are taken to possibly contribute to malignant transformation. Over expression of BCL-6, one of the key promoters responsible for GC development has actually been linked to the process of pathogenesis of diseases like diffuse large B cell lymphoma (DLBCL).

Since CD4 T-cells do have a role to play in anti-tumor immunity, the authors sought to find out what role CD4 T-cells play when it comes to aiding the tumour-suppressing function of CD8 T-cells, and possibly unpack the exact mechanisms that can account for the immunosurveillance observed from CD4 T-cells.

One aspect that was looked at was the role of CD137L, that has been proposed to function as a lymphoma suppressor via regulating GC B-cell responses. This was done using a well-established B-cell lymphoma mouse model, the Iμ-Bcl6Tg/+  strain. To shorten the time of lymphomagenesis, they crossed Iμ-Bcl6Tg/+ and the Cd8-/- mice (Iμ-Bcl6Tg/+Cd8-/-), since CD8 T-cells are important for the immuno-surveillance of B  lymphoma  cells in the Iμ-Bcl6Tg/+  strain.

As seen in Figure 1c, blocking CD137L significantly increased the  fraction  of  cells  with  an  activated  B  cell  phenotype  in the Iμ-Bcl6Tg/+Cd8-/- mice. Purified B cells from 12-week-old WT or disease-free  Iμ-Bcl6Tg/+  mice were cultured  in vitro  in  the  presence  of  an  anti-CD40  antibody,  IL-4,  and  IL-21  to  induce  a GC phenotype.  In figure 1d and 1e, we see that crosslinking CD137L by the addition of recombinant CD137 protein to the culture increased the differentiation   of Iμ-Bcl6Tg/+ B cells  into  GC-like cells. Based on this data, the authors suggest that CD137/CD137L-mediated signalling in Iμ-Bcl6Tg/+  B cells promotes activated  B  cells  to differentiate into GC cells. 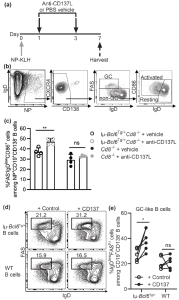 Figure 1: CD137-CD137L interactions promote the differentiation of CD86hiIgD lo premalignant cells into GC cells in Iμ-Bcl6Tg/+Cd8-/- mice. “(a) Iμ-Bcl6Tg/+Cd8-/- or Cd8-/- mice were immunised with 100 μg NP-KLH in alum on day 0 (n = 4 for each group). On day 1 and 3, mice were given 200 μg anti-CD137L blocking antibody or vehicle i.p. before spleens were harvested on day 7. (b) Representative gating strategy for NP+ naive, activated, and GC B cells among CD19+CD138- B cells. (c) Quantification of percentages of NP+ activated and GC B cells among CD19+CD138- B cells of all groups. An unpaired t-test was used. (d) Representative gating strategy for IgDlowFAShi GC-like B cells after 3.5 days culture in plates coated with or without recombinant mouse CD137 protein. (e) Quantification of IgDlowFAShi GC-like B cells among total CD19+CD138- B cells as gated in d after culture.

In their next set of experiments, they were able to determine that blocking CD137L in vivo promoted B-cell lymphoproliferative disease in their mouse model. Based on this development and the fact that CD137 is primarily expressed on activated T cells, the authors raised a hypothesis of CD 4 T-cells possibly preventing the onset of B-cell malignancies  via  a  CD137-CD137L  axis.

In figure 2, RNA sequencing of  12 lymphomas  derived from T cell-sufficient  mice (Iμ-Bcl6Tg/+) and 11 from T cell-deficient mice  (Iμ-Bcl6Tg/+Cd3e-/-) showed that B lymphoma  cells that  developed in the  absence of T  cells  expressed  higher  amounts  of  mRNA  corresponding  to  T-cell  costimulatory  molecules  including  CD137L and CD70 than   lymphoma   cells  derived  from  T-cell  sufficient  Iμ-Bcl6Tg/+  mice.

From the total workup of results, the authors had this to say about their work; “Here we  show  that  the  CD137/CD137L  costimulatory  pathway,  also  acting  in the cognate  interactions  between  premalignant   B  cells  and  CD4  T-cells,  mediates  the  further   differentiation  of  BCL6-driven  premalignant   B  cells  facilitated  by  CD4  T  cells  and  this  results  in  the  prevention  of malignancy  at an early activated  B  cell  stage”.