GET OUR MONTHLY NEWSLETTER
Immunopaedia > Breaking News > What happens to your cilia during SARS-CoV-2 infection?

What happens to your cilia during SARS-CoV-2 infection?

This mucus, with trapped particles, is ejected from the body following guided movement of the cilia towards the pharynx. SARS-CoV-2 is a virus capable of evading the mucociliary clearance pathway. The virus appears to directly infect ciliated cells and destroy cilia. Open reading frame 10 (ORF10) protein from SARS-CoV-2 has been found to be responsible for the loss of cilia. The protein is involved in promoting degradation of cilia through ubiquitin-dependent degradation.

In a recent paper, Fonseca, et al., sought out to describe the interaction between ORF10 and ZYG11B and determine whether it promotes the spread of SARS-CoV-2 (Figure 1). ORF10 seems to interact with various enzymes such as E3 ubiquitin ligase adapter along with others which promotes the escape of the virus from the ubiquitin/proteasome pathway which aid in the degradation of antiviral proteins. 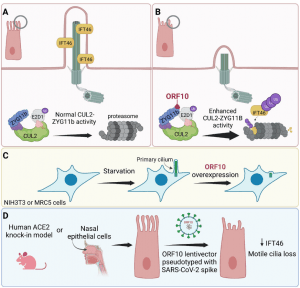 In this present study the researchers found that SARS-CoV-2 targets the ubiquitin/proteasome pathway and subsequently leads to the loss of ciliary proteins, whereby SARS-CoV-2 ORF10 protein is responsible for this degradation which results in the reduction of viral particle clearance and promotion of viral dissemination.