GET OUR MONTHLY NEWSLETTER
Immunopaedia > Breaking News > What does HIV infection have to do with T follicular regulatory cells (TFRs)?

What does HIV infection have to do with T follicular regulatory cells (TFRs)?

The persistence of HIV , particularly in immune-privileged sites, such as lymphoid tissues, has been one aspect that stands in the way of a complete cure. One of the cells identified as being a reservoir for persistent HIV infection are T follicular helper cells (TFHs). Further research into these cells has also brought to light the existence of T follicular regulatory cells (TFRs), that are known to aid in the function and frequency of TFH cells in germinal canters (GCs). What is still yet to be understood is what effect HIV has on TFRs.

In this paper, the authors decided to take a deep dive into TFRs using lymph nodes (LNs) and blood samples of HIV treated and untreated alongside healthy controls to determine the functions and key regulators of TFRs.

In figure 1A, we see graphical representation of the experimental setup used to determine the function and cytokine profile of TFRs. The authors determined that TFRs can limit or decrease TFH help to B-cells. This comes as a result of decreased IgG detected by ELISA when TFRs were present in TFH – B cell co-cultures (Figure 1B). Regarding cytokine production, in Figure 1C, we see results from digital droplet PCR (ddPCR) where the authors looked the production of the suppressor cytokine IL-10 from a set of samples from HIV negative, HIV infected + treated as well as HIV-infected but untreated individuals. TFRs had a higher expression of IL-10 in comparison to CD4 T-cells, providing more evidence towards their suppressive capabilities. 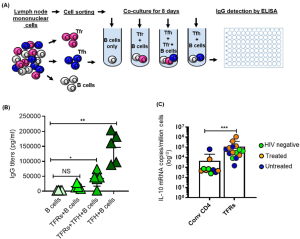 Figure 1: Assessing function of TFRs; A: Following cell sorting, TFH cells (5 × 104) were co-cultured, for 8 days, with autologous naïve B cells (5 × 104) in the presence or absence of TFRs (5 × 104). B cells that were cultured alone comprised the negative control. B shows results of IgG antibody detection after carrying out ELISAs. C: Shows results of TFRs and their capacity to produce IL-10. This was measured using digital droplet PCR (ddPCR). Samples came from 17 individuals (4 HIV negative, 8 HIV infected treated and 5 HIV-infected chronic untreated).

Another aspect the authors looked at was the effect of effect of HIV infection and the start of ART on the frequency of TFRs in comparison to TFH cells. In line with the suppressor function hinted on from Figure 1, the authors link increased TFR frequencies to a down-regulation in GC responses as other literature supports a higher TFR/TFH ratio causing a decrease in antibody responses. In Figure 2, the authors’ flow cytometry results show that there was a higher percentage of TFRs in HIV negative, HIV untreated donors and chronic untreated individuals. 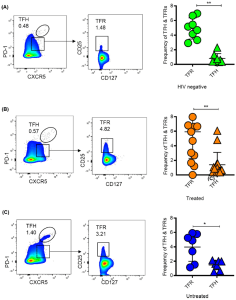 Two major limitations mentioned when it comes to studying these TFRs in depth has been the access and availability of LN samples as well widely identified and documented cell surface markers that properly distinguish TFRs from TFH cells. That is why the authors took a step to identify DPP4 and FCRL3 as markers that differentiate TFRs from TFH cells. What is yet to be determined is the exact role that both these markers play in TFR function. What we do know from this work is that TFRs can localize in the extrafollicular regions of the LN.

The authors concluded that “much about the role of TFRs in HIV pathogenesis remains unknown. We were unable to clearly determine the impact of HIV infection on TFR subsets due to low HIV viral loads in our clinical samples. There is need for more work to elucidate molecular mechanisms that drive TFRs expansion within the GCs, if and how the increased TFR frequencies inside GCs influence antibody production or TFH function.”