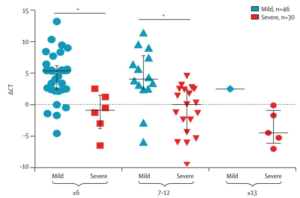 Due to the heterogeneity of disease symptoms in those infected with the COVID-19-causing virus, SARS-CoV-2, Liu and colleagues (Liu et al., 2020) set out to elucidate whether there were differences in viral dynamics between patients with severe versus mild COVID-19. More specifically, the authors evaluated the shedding of SARS-CoV-2 in nasopharyngeal samples.

Viral shedding was measured in a cohort of 76 patients who were confirmed to suffer from COVID-19 at the time of hospital admission. As expected, patients with severe illness (30 cases) were significantly older than those with mild illness (46 cases). The mean viral load was also 60 times higher in severe cases compared to mild ones, suggesting that viral load is a correlate of disease severity. Furthermore, viral loads remained higher in the first 12 days after disease onset in severe versus mild cases.

Testing of serial samples from a subset of severe (n=10) and mild (n=21) cases showed that SARS-CoV-2 was cleared more rapidly in mild cases. More specifically, 90% of mild patients repeatedly tested negative by day 10 post disease onset, while all severe patients still tested positive at that time-point and beyond.

Thus, the patients who went on to develop severe COVID-19 disease had high nasopharyngeal viral loads and longer shedding periods than those who only had mild disease symptoms. These results show viral shedding dynamics similar to that of the SARS-CoV responsible for the 2002-2003 epidemic and indicate that viral load may be a suitable marker for evaluating disease prognosis and severity.

The findings are also significant to isolation facility management since severe cases would need to be isolated for longer than ten days to avoid transmission risk due to viral shedding (Phua et al., 2020). Finally, the findings will inform decisions made about the safety of healthcare workers and patients, particularly around decisions on appropriate respiratory support for critically ill patients (Lyons and Callaghan, 2020).