Due to its seemingly “random,” presentation and variation in terms of disease severity, the coronavirus disease 2019 (COVID-19) pandemic continues to pose difficult questions to the scientific community which currently remained unanswered (READ: Immunity to COVID-19).

In a recent paper, researchers investigated and described the rate of changes in peripheral blood white cells (WBCs) in individuals who have recovered from SARS-CoV-2 infection, comparing the differences to alterations seen with other mild respiratory infections.  This study was published in medrxiv (NB to note: it is a preprint server which publishes preliminary scientific reports that are not peer-reviewed and, therefore, should not be regarded as conclusive, or guide clinical practice or treated as established information). In short, it was reported that there are short-lived changes in various cell subsets present in circulation that differentiated mild COVID-19 from other conditions.

It has been reported previously that SARS-CoV-2 infection can cause alterations in WBC. An acceleration of neutrophil-monocyte release from the bone marrow is expected, without effecting lymphocyte activity and numbers, however, SARS-CoV-2 has been associated with lymphopenia. Loss of T-cells during COVID-19 may be caused by the death of these cells within the secondary lymphoid organs. Another avenue of loss could be attributed to the influx of T-cells into the lungs or other organs following recruitment which may be potentially harmful. In addition to this, other immune symptoms of severe COVID-19 include hypergranularity and nuclear changes in monocytes and neutrophils, which have been linked to the premature release of these cells from the bone marrow, subsequently affecting maturation. The varying symptoms of long COVID-19 included: easy and severe fatigability, pain, breathlessness, and increased risk of re-admission to the hospital for respiratory problems.

In the present study, Kennedy, et al., recruited individuals with mild respiratory symptoms who had a prior positive COVID RT-PCR tests for COVID-19, or were serology positive for SARS-CoV-2 antibodies and vice versa (negative for both). It was reported that activated CD4 and CD8 T-cells numbers were increased following stimulation with one or more viral antigens of which they were; the membrane (M), the nucleocapsid (N) or the spike (S), at 1-9 months after mild COVID-19. The CD4 responses peaked at 1-3 months being compared to all antigens. At this point, CD4 but not CD8 T-cells were significantly higher in individuals who had recovered form COVID-19 than in those who had recovered from other respiratory infections (not at 6-9 months) (INTERESTING: SARS-CoV-2 variants-Subversion of antibody repsonse and predicted impact on T cell recognition; Ad26.CoV2.S vaccine significantly boosts pre-existing SARS-CoV-2 specific antibodies but not CD4 T cell immune responses).

The researchers provided evidence of prolonged inflammation following recovery, despite clinical recovery of all patients after a month following infection (Figure 1). It is thought that this prolonged inflammation may cause weakness or tiredness in recovered patients. Biomarkers measured for prolonged inflammation included C-reactive protein (CRP), tumor necrosis factor (TNF), and interleukin-6 (IL-6) in all serology positive individuals at 1-3 months. This seemed to remain consistent at 6-9 months with other respiratory infection. 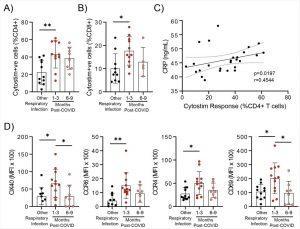 Polyclonal activation of T-cells was more significant and stronger with COVID-19 patients when compared to other respiratory infections. This highlighting defined changes characterising COVID-19 infection. Although the number of CD4 and CD8 T-cells were similar in both groups up to 9 months there was a difference in T-cell markers expressed. At 3 months from infection, natural killer cells were reduced, whereas regulatory T-cells (Treg) increased at 1-3 months. These changes reverted to the profile found in other respiratory infections by 6-9 months.

It was also indicated that there is a systemic activation of the immune response (transient) which may alter the pattern of migration in monocytes following mild infection with SARS-CoV-2.

Interestingly, the findings of this study indicates that following mild COVID-19 and in individuals without long COVID, individuals may have prolonged and high immune activation and systemic inflammation for 1-3 months following clinical recovery, highlighting that memory cell responses do not correlate with clinical phenotype. The data from this study provided evidence of prolonged inflammation following recovery from infection which differs from other respiratory infection.