In a new study, Ningbo, et al., has described a novel way of combining two treatments which may be effective in treating treatment-resistant cancers.

The immune system is a powerful and essential tool, used as a protective system against a variety of pathogens and threats. Despite the effcicient evolution of the immune system, it can sometimes malfunction and harm the body, which in some cases leads to various cancers. As the immune system tries to deal with the cancers, it can sometimes miss its target, leading to the development of cancer. This present study describes a new form of a combination between immunotherapy and virotherapy, utilising the myxoma virus, which may provide a new approach to treating cancer (Figure 1). 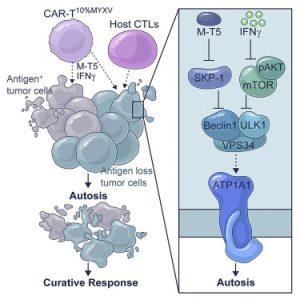 In this study, researchers investigated oncolytic virotherapy, a technique using cancer-fighting viruses, and showed how it can work in conjunction with existing immunotherapy techniques, to enhance the immune system and destroy cancerous cells. Making use of a T-cells infected with a myxoma virus, they were able to induce a novel form of cancer cell death called autosis. Autosis is a form of cell death enhances apoptosis and pyroptosis which are two forms of programmed cancer cell death induced by T-cells.

During autosis which is mediated by the myxoma virus, the aggressive targeting of cancer cells and those in close proximity/the vicinity is achieved in a process called bystander killing. This in conjunction with immunotherapy may lead to a new and improved approach towards destroying otherwise hard to treat cancers.