Tuberculosis (TB), caused by members of the Mycobacterium tuberculosis (Mtb), is a severe chronic disease that can affect humans and animals. Mtb is a leading cause of death in the world (1.5 million deaths every year). Among people who are infected, only 10% will develop TB, 90% of these infections are latent (LTBI). This pathology presents the difference in immune control of Mtb. Macrophages (MΦs) are significant phagocytes that play a key role in innate and adaptive immunity. Their phenotypes stimulated with IFNy (pro-inflammatory) or IL-4, IL-13, and IL-10 (anti-inflammatory) determine the type of Mtb response.

In a recent paper, Khan, et al., hypothesized that the MΦ phenotype can enhance anti-TB function following cytokine stimulation, and this stimulation can explain the development of LTBI (Figure 1). They showed that infected M1-MФs survived better with upregulation of genes and pathways that regulate antigen processing Compared to M2-MФs. They highlight also M1-MΦs driven with IFN-γ increased the ability to bacterial control with the pro-inflammatory cytokine, nitric oxide expression, and autophagy-dependent degradation of Mtb, whereas IL-4 programmed M2-polarized MΦs (M2-MΦs) are permissive for Mtb proliferation. 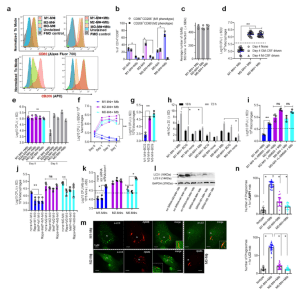