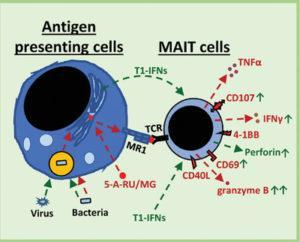 Mucosal-associated invariant T cells (MAITs) are a population of non-conventional innate-like T cells that recognize vitamin B metabolites, primarily riboflavin, via the MHC-related protein-1 (MR1) molecule. MAITs can also be activated in a TCR-independent mechanism primarily via IL-12 and IL-18, and can respond to pathogens that lack a riboflavin pathway such as viruses. Recent evidence suggest that Type I -interferons (T1-IFNs) IFN-α and IFN-β can activate of MAITs . However, this mechanism is not fully understood. Researchers from New Zealand (Lamichane et al., 2020) aimed to investigate this and specifically focused on the role of T1-IFN-mediated activation of MAITs in the context of MR1-TCR activation.

Lamichane et al., showed that both IFN-α and IFN-β separately enhanced MAIT cell activation and cytokine function only in a co-stimulatory manner. Whereas both T1-IFNs were able to induce expression of cytotoxic molecules Granzyme B, Perforin and CD107 by MAITs in the absence of MR1-TCR activation, albeit at lower proportions compared to TCR-activated MAITs. Researchers further showed that T1-IFNs induced by influenza-A-virus “enhanced the activation of TCR-stimulated MAIT cells in a T1-IFN dependent manner. This may have implications for MAIT cell activation during lower respiratory tract infections, where co-infection with bacteria and respiratory viruses are common.” Additionally, these results provide a potential mechanism by which viruses can activate MAIT cells activation.

In summary results by Lamichane et al., establish an important immunomodulatory and co-stimulatory role of T1‐IFNs during TCR‐mediated MAIT cell activation. T1-IFNs-induced activation could act by either activating antigen-presenting cells to upregulate MR-1 on these, or directly interact with MAITs cells via T1-IFN receptor, which MAITs express at high levels.