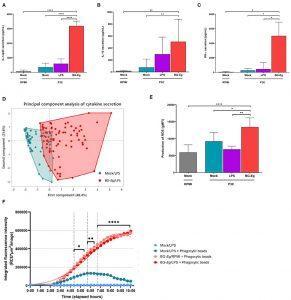 Trained immunity is short-lived memory by innate cells such as monocytes and natural killer cells that results in resistance to non-specific infection. Mechanistic studies have attributed trained immunity to epigenetic reprogramming that occurs when innate immune cells are activated by infection or vaccination (Netea et al., 2016). This epigenetic reprogramming results in enhanced inflammatory and antimicrobial properties in innate cells when encountered with secondary stimuli. Initial studies that described trained immunity were predominantly using Bacille Calmette-Guerin vaccine (BCG) or prototypical agonists like β-glucans models. Further, besides in humans and mice, there is a limited understanding of trained immunity in other mammals. A recent, study by researchers in the UK and France investigated the induction of trained immunity in Dogs.

In their study, Paris et al., investigate pro-inflammatory functions, using utilised ELISA, Luminex and flow cytometry ,  and also measured the activity of reactive oxygen species and phagocytosis by canine macrophages. Using an adapted in vitro experimental model of immune training,  they confirmed that stimulation of monocyte with β-glucans resulted in increased production of pro-inflammatory and anti-microbial compounds. Further, they demonstrated that blocking of histone methylation during in vitro training of cells completely abolished the effect on cytokine secretion.

Thus based on results described above, researchers demonstrated for the first time trained immunity in dogs, which shares similar functional features as those detected in other mammalian species.