The role of the PD-1 blockade in Mycobacterium tuberculosis infection

PD-1 is a known a checkpoint inhibitor, whose role in dampening or negatively affecting immune responses has been established. As a result of this, a lot of work has been carried out to counteract these effects, leading to breakthroughs in the world of immunotherapy. One example would be in the successful treatment of cancer as a result of anti-PD1 immunotherapy.

This shift in the use of host-directed therapy is something scientists the world over would love to see applied for several infectious diseases. The role that PD-1 plays in these other disease states, however, is something that we need to take note of before proceeding to apply this knowledge within this field. With this mind, the aim of the work done by Kaufmann and colleagues in this paper was to therefore examine the role of PD-1 during Mtb infection.

Kaufmann, et al., chose to carry out this work in twelve healthy, male, 2-year-old rhesus macaques (Figure 1) that were infected with 30 to 50 CFU of an mCherry-expressing H37Rv strain of Mtb. From 2 weeks post-infection, 6 macaques were treated with a PD-1–blocking mAb while the other 6 received an isotype control monoclonal antibody (mAb). At either week 15 or 16 post-infection, animals were necropsied.

Figure 1: Twelve animals were infected with 30 to 50 CFU of H37Rv-mCherry. Animals were anesthetized and 2 ml of saline containing the bacteria was bronchoscopically instilled into the right lower lung lobe. Infection dose was confirmed by plating of aliquots onto 7H11 agar plates. At weeks 2, 4, 6, 8, 10, and 13 after infection, animals were intravenously infused with 10 mg/kg of body weight of either rhesus macaque IgG4 isotype control antibody (DSPR4) obtained from the NHP Reagent Resource or αPD-1 (humanized clone EH12 ƙ variable domains with rhesus macaque and IgG4 constant regions) (Kauffman, et al., 2021).

First and foremost, granulomas in αPD-1–treated macaques were noted to be larger and these animals also had close to a 20-fold increase in bacterial load within their granulomas in comparison to macaques treated with the isotype control mAb.

The authors proceeded to look at the frequency of Mtb specific T-cells within the granulomas of these animals. PD-1 blockade led to a marked increase in the number of CD8 T-cells, however, the frequency of Mtb-specific CD4-T cells was not very different between isotype control and αPD-1–treated animals. With regards to T-cell subsets such as Foxp3+ CD4 T cells and MAIT (mucosal associated invariant T) cells, PD-1 blockade had no effect.

When it came to the functional profile of these Mtb specific T-cells, PD-1 blockade did not alter the production of IFN-γ, CD153, or granzyme B by CD4 T cells. It did, however, increase the expression of another negative regulatory molecule on the cells i.e., CTLA-4. In complete contrast, PD-1 blockade    led to an increase in production of IFN-γ, IL-2, and granzyme B in Mtb-specific CD8 T-cells without any increase in CTLA-4 expression.

The authors also wanted to assess the extent of inflammation that was present and were able to determine this by measuring the levels of several inflammatory markers (Figure 2). IL-18, IFNα, and TNF were noted as the cytokines that were the most upregulated after PD-1 blockade. In line with PD-1 blockade increasing bacterial load, Kaufmann et al show that there were more positive correlations between soluble mediators and bacterial loads in granulomas of αPD-1 treated animals in comparison to those that were treated with the isotype control. 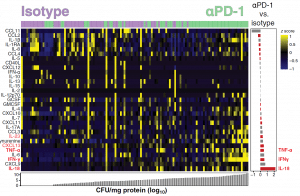 Figure 2: Data were log-transformed and z score–normalized. Markers were ranked according to mycobacterial load values (CFU/mg of protein) and fold difference value between the different experimental groups. A heatmap was built to describe the overall expression profile of the inflammatory markers in each granuloma from monkeys labelled according to the experimental group indicated by distinct colors (green for isotype control and purple for αPD-1). Right: Average fold difference values in expression of inflammatory markers in granulomas from monkeys treated with anti-PD1 versus isotype controls are described (log-transformed values). Differences that reached statistical significance with the Mann-Whitney U test adjusted for multiple comparisons using the Holm-Bonferroni’s method (adjusted P < 0.05) are represented in colored bars (Kauffman, et al., 2021).

One key take-home message from the work carried out here would be that T helper 1 cell function has to be appropriately balanced in order to see optimal control of the infection. Supporting information for this would come from in-vitro studies that have shown how stimulating Mtb-infected macrophages with high concentrations of IFNγ led to macrophage death as opposed to that of the bacterium. In this paper, a positive correlation was noted between bacterial loads after PD-1 blockade and a dysregulated expression of IFNγ, TNF, and IL-18 withing granulomas.

We can also the role that the timing of blockade can play in relation to the onset of infection and the specific pathogen present at that time, as these are likely key factors that can dictate whether PD-1 blockade ends up being of benefit or just detrimental during infectious disease states.