The Immune Function of Osteoclasts 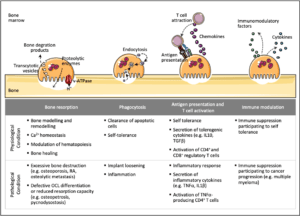 The different immune-related roles of osteoclasts. Beyond bone resorption, osteoclasts share many functions with their progenitors including phagocytosis, antigen presentation and immunomodulation. (Source Madel et al. 2019)

Osteoclasts (OCLs) are multi-nucleated phagocytes of monocytic origin that are responsible for bone resorption. Changes in their bone resorption function are associated with various pathologies such as osteoporosis, chronic inflammation and cancer. Intensive studies investigating the regulation of OCLs by T cells under inflammatory conditions have been conducted over the last years and introduced the interdisciplinary field of osteoimmunology. It has been described that OCLs respond to several interleukins produced by activated CD4+ T cells such as receptor activator of NF-kB ligand (RANKL), a key cytokine in the differentiation of osteoclasts, TNF-α and IL-17. For example, IL-17-expressing Th17 cells were associated with increased bone resorption and osteoclastogenesis by enhancing RANKL secretion and upregulating the RANK receptor in OCL progenitors.

Besides numerous studies investigating the potential effect of T cells on OCLs, we have a limited knowledge of the contribution of OCLs on immune modulation. However, recent studies emphasise that OCLs are true antigen-presenting cells that can regulate and control T cell activation. Moreover, OCLs are able to express chemokines for T cell attraction as efficiently as dendritic cells, as a result T cells have been observed in close proximity of OCLs. Together with their antigen presenting function, this suggests that OCLs are able to induce T cells in the bone marrow.

Indeed, a study by Kiesel et al. showed that OCLs activate CD8+ T cell proliferation and activation by antigen cross-presentation, which was previously thought to be a unique function of dendritic cells 1. The same group showed that CD8+ regulatory T cells that are induced by OCLs are in turn able to suppress the resorptive function and differentiation of OCLs 2. More recently, a study by Ibanez et al. demonstrated that during steady state conditions, OCLs induce FoxP3+ CD4+ T cells in an antigen-specific manner, while during inflammatory conditions, OCLs induced TNFa-producing CD4+ T cells 3. These data revealed the existence of different OCL subsets that have opposite effects on the immune system. Moreover, this study demonstrated that the induction of regulatory or inflammatory T cells is highly dependent on the origin of OCL progenitors. This emphasizes that similar to other monocytic lineage cells such as monocytes or dendritic cells, which are known to be OCL progenitors, OCLs have a phenotypic and functional plasticity participating to their anti-inflammatory or pro-inflammatory effect depending on their origin and microenvironment.

These studies clearly demonstrated that OCLs are not only regulated by T cells, but can also modulate the activation of T cells themselves, thereby influencing the immune response towards immunosuppression or inflammation. This highlights that OCLs are much more than just simple bone resorbing cells and emphasize that OCL function can be expanded to immune cell differentiation and immunomodulation. We recently published a review 4 summarizing all these very new aspects in the field of osteoimmunology by regarding the OCL as an innate immune cell participating in the control of immune responses.