GET OUR MONTHLY NEWSLETTER
Immunopaedia > Breaking News > The emergence of inflammatory monocytes as the leukemia anteroom.

The emergence of inflammatory monocytes as the leukemia anteroom.

The role of inflammation in the context of tumours has been studied in the last years and at this point has been declared a hallmark of cancer. Although inflammation is a cause or consequence of cancer is still under investigation, the main role players are the immune cells which are produced trough hematopoiesis in the bone marrow (BM).

It’s well known that mutations in TET2 occur in individuals with clonal hematopoiesis (CH) characterized by clonal expansion of mutated cells. It has been documented that those mutations occur in the hematopoietic stem cells (HSC) compartment and remain dormant throughout life. Hypothetically, the adaptation to aging puts pressure on the microenvironment for their activation (inflammaging) and selection due to their mutant-acquired fitness. Interestingly, individuals with CH have higher risk to develop myeloid proliferative diseases such as acute myeloid leukemia (AML) and other diseases.

In a recent paper, the laboratory of Dr. Iannis Aifantis has developed a novel mouse model carrying a TET2 missense mutation which develop a broad spectrum of myeloid cancers late in life. Thus, single-cell technologies were implemented to map the transition from indolent hematopoiesis to pathological states. Among their findings, an interferon signature characterizes the malignant TET2 BM cells with the emergence of an inflammatory MCH II monocytic population which correlates with abundant levels of inflammatory cytokines in the BM microenvironment. More interestingly, the presence of those inflammatory monocytes correlates with worse prognosis in AML when available human patient databases were analyzed.

What was interesting was that the inflammatory signature can be detected in the HSC compartment and its progeny in the mutant animals suggesting a pro-inflammatory priming endorsed by the TET2HR mutation. Remarkably, a chronic inflammatory condition stimulated by the uninterrupted administration of LPS promotes the expansion of those inflammatory monocytes which can be detected in peripheral blood in the mutant animals but not in the controls suggesting that an extrinsic inflammatory program cooperates with the cell-intrinsic events that promotes malignant transformation in the context of CH. Therefore, blockage of innate inflammatory signaling pathways as TLR signaling in CH may perturbs the emergency of pathological immune cells and the consequential development of cardiovascular disease, pulmonary disease, and type 2 diabetes or blood malignancies, maladies that has been well associated with CH. 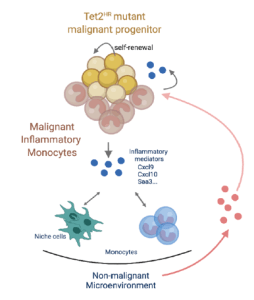 Figure 1: The pro-tumorigenic role of the pathological inflammatory monocytes derived from Tet2HR mutant. Chronic conditions as infections or inflammaging may awake the dormant pre-malignant cells in the bone marrow. After their activation, the pre-leukemic tet2 mutant clones are expanded due their increased self-renewal capacity and then give arise the inflammatory monocytes creating an uncontrolled inflammatory microenvironment that cooperates with malignant transformation and the establishment of leukemia (Source: Yeaton A. Cancer Discovery 2022).