In a recent study, Wilson, et al., have described how Th17 cell promote the onset of certain autoimmune diseases such as multiple sclerosis (MS). The researchers have discovered a mechanism used by Th17 to fulfil its function within the immune system – neutrophil extracellular traps (NETs). These NETs play a role in elevating the expression of inflammatory Th17 cells (Read more: Neutrophilic aid – extracellular traps to enhance macrophage directed bacterial killing). They are hoping that this discovery may lead to new ways to inhibit or disrupt these inflammatory NET-Th17 interactions in order to reduce harmful inflammation. Consequently, this may lead to better treatments of diseases such as MS (sign-in and read more: NETs – a new strategy for using old weapons).

Th17 cells, which are normal beneficial to the immune system, have a bad side when activated past their necessity as they can cause harmful inflammation, promoting harmful conditions within the body. NETs, produced by neutrophils, function to trap and destroy pathogenic bacteria and protect the body from infection. However, Wilson, et al., found that these NETs activate Th17 cells thereby enhancing their detrimental effect (Figure 1). 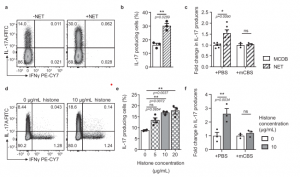 Seeing that histones in humans and mice, proteins within NETS, can activate Th17 cells leading to them becoming harmful, the team thought to target these histones with a histone-neutralizing drug, mCBS. This drug was originally developed to treat sepsis. In the long term, though one cannot prevent autoimmune diseases such as MS, therapies such as these may lead to a potential treatment which will allow for the management of such diseases.