Immunotherapy is an astonishing tool which we can utilise to prime one’s own immune system to fight off cancer.  Unfortunately, immunotherapy does not always work.

The genetic make-up of T cells and how they develop determines their response to immunotherapy and patient survival. This is specific to when T lymphocytes invade tumours for destruction. In a recent paper, Jaiswal, et al., researchers analysed several human tumour samples as well as T cell populations and tumour types. They compared this data to models of T cell behaviour in response to infections, vaccines and cancer (Figure 1). They found that T cells either become stuck in an early activation state or develop into memory cells that are expanded by current immunotherapy approaches. 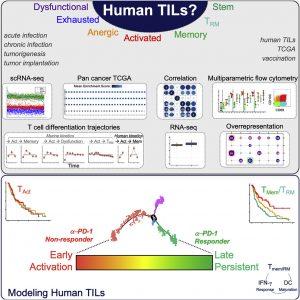 The immune system is capable of recognising and eliminating tumour cells, however as this process can break time, this may lead to the progression of cancer. Through the use of data sets comprising certain genetic biomarkers in addition to various genomic techniques, the researchers were able to determine the outcome and characterise T cells in tumours, describing how they develop. They showed that T cells develop in different ways. Following early activation, some T cell activity ceases and they convert to memory T cells instead of the, thought to be the only path, T cell exhaustion. Interestingly, the enrichment of these T cells positively correlates with successful response to immune checkpoint blockade therapy, a form of immunotherapy, as well as patient survival.

The present study presents findings that may lead to the improvement of therapeutics.