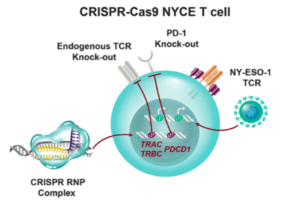 Discovery of CRISPR (clustered regularly interspaced short palindromic re- peats) in E.coli in 1987, and the subsequent development of CRISPR-Cas9 -(CRISPR associated with Cas9 endonuclease- in 2012 (in “parallel” by Gasiunas et al., 2012 & Jinek et al., 2012) has sparked interest in the utility of gene-editing as immunotherapy. [Read more about CRISPR Timeline and listen to Freakonomics Podcast of Jennifer Doudna]. Advances in CRISPR-Cas 9 technology has enabled modification of immune cells to improve cancer immunotherapy. Where cancer-patients’ own cells are genetically engineered at single cell levels to target cancer-immunogens, resulting in direct killing of cancer cells. However, this can be challenging as “engineered cells” in the case of T cells can become exhausted and dysfunctional, resulting in unwanted and potentially detrimental effects.

Bloodwork from the patients showed the CRISPR-edited T cells circulated in the body for at least nine months. The editing did have some “off-target” effects, in which the wrong DNA was unintentionally edited. However the number of cells with unintended changes were minimal and these cells were short-lived.

Overall the clinical trial was a success, showing CRISPR gene-editing is safe and can be used at clinical scale for cancer immunotherapy. A follow-up study on a larger cohort and longer follow-up will be needed to determine safety before scaling up the trial to determine potential efficacy.