GET OUR MONTHLY NEWSLETTER
Immunopaedia > Breaking News > Sugar and autoimmune diseases: what are the risks?

Sugar and autoimmune diseases: what are the risks?

Recent studies have shown that people who consume high amounts of sugar and carbohydrates over an extended period of time, are at an increased risk of developing an autoimmune disease. Researchers are still trying to understand the complex mechanisms underlying the physiology of autoimmune diseases.

Hochrein, et al., has reported that a specific glucose transporter (GLUT3) may be implicated in other metabolic functions in addition to its main role of generating energy from glucose (Figure 1). In the present study, the researchers investigated a relatively undescribed immune cell type – T helper cells of type 17 (Th17) lymphocytes. These are essential for the regulation of inflammatory processes and have been found to express GLUT3 on their cell surface. Cells convert glucose into citric acid, before conversion into acetyl-coenzyme A (acetyl-CoA). This molecule is key to numerous metabolic processes in the body. Acetyl-CoA has a direct effect on the function of Th17 cells, thereby effecting the regulation of inflammatory process in the body. 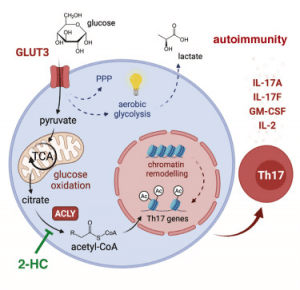 The findings of their study have highlighted a potential target for therapy of autoimmune diseases i.e. blocking of GLUT3-dependent synthesis of acetyl-CoA which can inhibit or block the effects of Th17 cells and reduce pathological inflammation. This blockade of glucose-depended metabolic processes may help suppress overactive immune systems which are common in autoimmune disease.

“Metabolomic, epigenetic, and transcriptomic analyses linked GLUT3 to mitochondrial glucose oxidation and ACLY-dependent acetyl-CoA generation as a rate-limiting step in the epigenetic regulation of inflammatory gene expression. Our findings are also important from a translational perspective because inhibiting GLUT3-dependent acetyl-CoA generation is a promising metabolic checkpoint to mitigate Th17-cell-mediated inflammatory diseases.”