Urinary tract infections (UTIs) caused by uropathogenic E.coli (UPEC) are one of the most common bacterial infections that predominantly affects women. Some individuals spontaneously resolve UTI, whereas other others require antibiotic treatment to clear the infection. Despite antibiotic treatment, some individuals still have recurrent UTI caused by the initial UPEC strain. This suggests that adaptive immunity is not always sufficient to confer protection. O’Brien et al., aimed to determine the role of bacterial diversity and adaptive immunity during UTI. They conducted an in vivo murine model of UTI, where mice (C3H/HeN strain)  were either infected with clinical UPEC strains UT189 or CFT073. 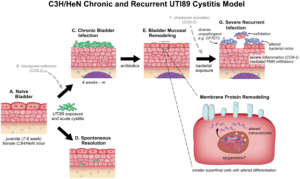 Researchers have previously shown in mice that UT189 either spontaneously resolves or causes chronic bladder infection that requires antibiotic treatment to clear. In addition, they showed that chronic bladder infection occurred after activation of COX-2, and results in a molecular imprint rendering the mice highly susceptible to severe recurrent infections. In this study O’Brien et al., showed that CFT073 does not cause a chronic infection, instead the infection spontaneously resolves without the need  of antibiotic treatment. Unlike the UT189 strain, CFT073 prevents recurrent UTI due to CFT073. However, this protective effect was not observed in response to secondary challenge with  UT189, highlighting a strain-specific predisposition to recurrent UTI. This finding suggested a potential role of adaptive immunity in clearing infection and preventing reinfection.

To determine if cellular immunity contributed to this predisposition, they depleted T cells during either during primary or secondary UTI. O’Brien et al., showed that T cell depletion did not affect UTI kinetics. Interestingly they showed that though T cell depletion increased susceptibility to recurrent CFT073 infection but had no effect on UT189 reinfection. 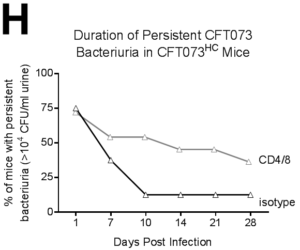 In summary, this study showed that protective immune responses to UPEC are strain specific, where CFT073 but UT189 is able to induce protective immunity that involves T cells. Further studies are needed to elucidate the mechanisms of protective adaptive cellular immunity against UTI.