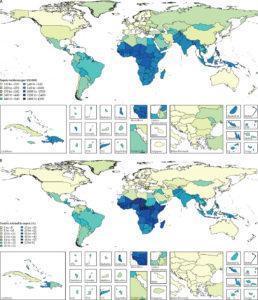 Sepsis is life-threatening organ dysfunction due to a dysregulated host response to infection (Singer et al., 2016). Sepsis is actually recognised as a major global health problem, and the World Health Assembly has urged member states to strengthen eﬀorts to identify, document, prevent, and treat sepsis (1). Although few estimates of the global incidence of sepsis or mortality from this disorder exist. Current data underestimate the prevalence, which has been extrapolated from data on adults only with sepsis treated in hospital, in high-income countries and using different case definitions.

They highlighted that the global burden of sepsis is larger than previously appreciated, requiring urgent attention. In addition, there is substantial variation in sepsis incidence and mortality according to lowest socio-demographic index, with the highest burden in locations that are least equipped to prevent, identify, or treat sepsis such as Sub-saharan Africa. Emphasing the need for greater effort for prevention and treatments in these regions. These findings tell as that is it time to focus in sepsis, mainly in Africa, at all levels of prevention mainly but also research that aims to find next next generation treatment.

Sepsis is wanted in Africa !