From the year 2019 when it was discovered, severe acute respiratory syndrome coronavirus-2 (SAR-CoV-2 ) has solely been responsible for the pandemic that has made waves the world over. What we thought would end in 2020 carried on way beyond that and this was driven by the emergence of several variants of concern (VOCs), such as Gamma, Delta and Omicron.

Reports from WHO did indicate that Omicron lead to far less severe disease, however, having an in-depth understanding of the exact pathology behind this particular has been lacking. Most animal work, especially to test any therapeutic interventions ends up taking place in non-human primates. The Syrian golden hamster (Mesocricetus auratus) model, however, has been identified as being better suited for studying the pathology of SARCoV2 in particular since this model can effective mimic moderate to severe COVID-19

The study aim from the authors was to focus on the respiratory tract and gather information on the pathogenicity of Omicron variant, in comparison to other VOC. They investigated the upper and lower respiratory tract of 8–10 weeks old Syrian golden hamsters after intranasal inoculation with 104 TCID50 of either SARS-CoV-2 614 G, or VOC Gamma (P.1, Brazil), VOC Delta (B.1.617.2, India) or VOC Omicron (B.1.1.529, South Africa) variants.

As shown in Figure 1, it was seen that Omicron infection in hamsters did not cause weight loss and induced minimal macroscopic lesions in the lungs. SARS-CoV-2 Omicron infected hamsters showed an average increase in body weight of 3.1% (figure 1) in comparison to infection with other VOCs, alongside the presence of very minimal foci of reddish discoloration. 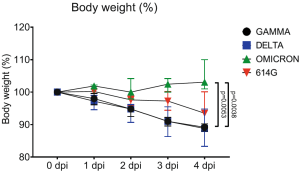 In figure 2, we see that VOC Omicron infection in hamsters displays decreased pathogenicity for the upper respiratory tract. Hamsters infected with the Omicron strain had a far milder form of rhinitis in comparison to those with SARS-CoV-2 614 G, Delta and Gamma. The histopatholgical lesions from all VOC were looked at based on a semi-quantitative scoring system which included levels of inflammation, hyperplasia, necrosis, and intraluminal cell debris. The score from hamsters infected with VOC Omicron was significantly lower. 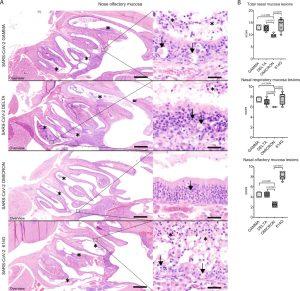 Figure 2: Decreased pathogenicity of VOC Omicron for nasal olfactory mucosa compared to other SARS-CoV-2 strains: “A Representative images showing an overview of the caudal nasal turbinates (left panel) and high magnification of the olfactory mucosa (right panel) of hamsters infected with VOCs Gamma, Delta, Omicron or 614 G strain. Olfactory mucosa in VOCs Gamma and Delta or 614G infected hamsters showed the most striking histopathological changes. Lesions were mainly characterized by disorganization, cell death (arrows) and cell sloughing, associated with intraluminal exudate composed of proteinaceous fluid, cell debris and degenerated neutrophils/heterophils (asterisks). Olfactory mucosa in VOC Omicron infected hamsters was largely intact and only occasional cell death was observed (arrow). Scale bars= 1mm (overviews) and 50 μm (high magnifications). Hematoxylin and eosin stain. B Semi-quantitative analysis of nasal turbinates histopathology revealed significantly lower values in the overall score as well as the separate scores for respiratory and olfactory mucosa in VOC Omicron infected hamsters. Data are shown as box and whisker plots. The bounds of the box plot indicate the 25th and 75th percentiles, the bar indicates medians, and the whiskers indicate minima and maxima. Data were tested by twotailed Mann–Whitney-U tests followed by Benjamini–Hochberg correction. A p-value of ≤0.05 was chosen as the cut-off for statistical significance. N = 5 animals/group for VOCs Gamma and Delta and 6 animals/group for VOC Omicron and 614 G. For quantification, one entire longitudinal section of the nasal turbinates was evaluated per animal”.

Some of the parameters looked at and assessed in this paper could very well serve as mechanisms that could help explain part of the phenomenon seen when it comes to infection with the Omicron strain in human beings. The reduced pathogenicity could very well be why there was less hospital cases or far less deaths in comparison to what we saw from the Delta virus worldwide.

One question that the authors raise and one that very many other researchers have had is finding out what drove Omicron to still spread twice as fast among human beings. To this the author say “One may postulate that it is due to an increased virus replication of VOC Omicron especially in human airways, as also indicated by a study demonstrating an increased replication and virus release of VOC Omicron in ex vivo cultures of the human bronchus. However, this has not been unequivocally reproduced in a rodent in vivo model yet”.