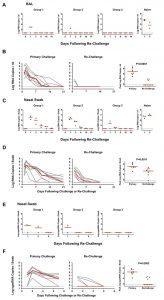 With an impending second wave of SARS-CoV-2 infections predicted, one important question is whether a person infected once can develop enough durable protective immunity to prevent re-infection when exposed again. In a recent edition of Science, a rhesus macaque model of SARS-CoV-2 infection was developed, where “high viral loads in the upper and lower respiratory tract, humoral and cellular immune responses, and pathologic evidence of viral pneumonia” was observed. After clearance of the initial infection in all nine animals used, they were re-challenged with SARS-CoV-2 and there was a 5 log10 reduction in viral loads in bronchoalveolar lavage and nasal mucosa. However, the authors conclude: “Given the near-complete protection in all animals following SARS-CoV-2 re-challenge, we were unable to determine immune correlates of protection in this study.” This was despite the monkeys making robust humoral and cellular responses. It is tempting to regard the rapid neutralizing antibody responses, along with T cell immunity, as mediators of protection from re-infection. However, this has yet to be shown. The authors conclude: “These data raise the possibility that immunologic approaches to the prevention and treatment of SARS-CoV-2 infection may in fact be possible.”