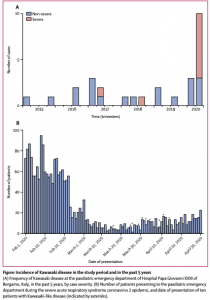 Kawasaki disease is an acute self-limiting vasculitis with specific predilection for the coronary arteries that affects previously healthy young infants and children. Since this was first reported half a century ago in Japan, the cause of this condition remains unknown. The most accepted hypothesis supports an aberrant response of the immune system to one or more unidentified pathogens in genetically predisposed subjects. An infectious trigger, however, has not been identified. Look at our case study to find out more about the pathogenesis of Kawasaki disease. Investigators in the Bergamo province of northern Italy found a 30-fold increased incidence of Kawasaki disease and they report in The Lancet that children diagnosed after the SARS-CoV-2  epidemic had a higher rate of cardiac involvement and features of Macrophage Activation Syndrome (MAS). They concluded that young children infected with SARS-CoV-2, rather than develop respiratory illness, progress to a severe form of Kawasaki-like disease and require adjunctive steroid treatment.

Journal Article: Verdoni et al., 2020. An outbreak of severe Kawasaki-like disease at the Italian epicentre of the SARS-CoV-2 epidemic: an observational cohort study. The Lancet