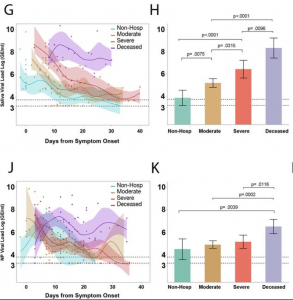 Saliva viral load is strongly associated with spectrum of disease severity throughout the course of illness. (G) Comparison of saliva viral load between non-hospitalized, moderate, severe, and deceased individuals across days from symptom onset. Points represent a unique individual-timepoint and color represents the clinical severity status of that given individual-timepoint as labelled. Moderate and severe classification represents only individual-timepoints of patients who survived. A cubic spline fitted to the mean with a lambda of 0.05 is shown for each severity group. Shading of the lines represent the bootstrap confidence of fit. (H) Least squares Mean analysis comparing mean saliva viral load amongst spectrum of disease over days from symptom onset using Restricted Maximum Likelihood (REML) to account for repeated measures for the same individuals. Significance was adjusted for multiple comparisons using the Tukey method. (J, K) Comparison of nasopharyngeal viral load between spectrums of disease severity as described for saliva viral load in (G) and (H) respectively. Dotted lines VLP=positivity threshold for viral load is 3.75 Log (Genomic Equivalents [GE]/ml)); VLD=viral load limit of detection is 3.22 Log (GE/ml). (Source: Silva et al., Pre-print)

Determining COVID-19 severity and mortality in patients is an evolving and important topic as it is needed to guide clinical practice. COVID-19 patients’ prognosis cannot be simply judged by how they visually appear. In a phenomenon known as “happy hypoxia,” patients who do not appear distressed have been found to be extremely hypoxic, with oxygen saturation levels as low as 50%. Patients usually lose consciousness at oxygen saturation levels under 75%.

While blood tests and nasopharyngeal viral load can give some insight on disease severity, the development of other tests such as saliva tests can give clinicians a better picture of patient prognosis.

Silva et al., found that saliva viral load was significantly higher in people with COVID-19 risk factors, correlated with increased disease severity, and was a stronger predictor of mortality over time compared to nasopharyngeal viral load.

Authors concluded that: “Together these results demonstrated that viral load – as measured by saliva but not nasopharyngeal — is a dynamic unifying correlate of disease presentation, severity, and mortality over time.”