GET OUR MONTHLY NEWSLETTER
Immunopaedia > Breaking News > Safety and immunogenicity of the SARS-CoV-2 mRNA-1273 vaccine candidate in older age.

Safety and immunogenicity of the SARS-CoV-2 mRNA-1273 vaccine candidate in older age. 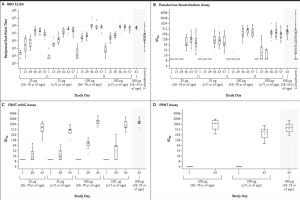 SARS-CoV-2 Antibody-Binding and Neutralization Responses.
Shown are reciprocal end-point binding IgG titers on receptor-binding domain (RBD) enzyme-linked immunosorbent assay (ELISA) (Panel A), along with titers to 614D on the pseudovirus neutralization assay at a 50% inhibitory dilution (ID50) (Panel B), on the focus reduction neutralization test mNeonGreen assay (FRNT-mNG ID50) (Panel C), and on plaque-reduction neutralization testing (PRNT80) (Panel D).2 PRNT80 results were available only for the participants who had received the 100-μg dose of the mRNA-1273 vaccine on days 1 and 43. Boxes denote interquartile ranges, and horizontal bars denote median end-point titers. Whisker end points denote the maximum and minimum values below or above the median at 1.5 times the interquartile range. The shaded portion on the right side of each panel indicates one or two categories of reference values: antibody titers from 41 controls who had donated convalescent serum (Panels A and B) and antibody titers from participants between the ages of 18 and 55 years who had received the 100-μg dose of mRNA-1273 (Panels A through D) (Source: Anderson et al., 2020 NEJM)

A follow-up article published in NEJM showed that the mRNA vaccine, mRNA-1273, was safe and immunogenic in older vaccine volunteers, aged 56-70 years. A previous correspondence had shown acceptable safety and reactogenicity profile in younger people, aged 18 and 55 years. As older people may have less ability to respond to a COVID-19 vaccine, it was deemed important to show equivalent safety and immunogenicity in an older group. The vaccine “encodes a stabilised version of the SARS-CoV-2 full-length spike glycoprotein trimer, S-2P, which has been modified to include two proline substitutions at the top of the central helix in the S2 subunit. The mRNA is encapsulated in lipid nanoparticles…”. Importantly, no serious adverse events were reported using two different does and two immunisations. The most common solicited adverse events were headache, fatigue, myalgia, chills, and injection-site pain. Both binding- and neutralising-antibody responses were elicited after the two doses and were above the responses detected in convalescent serum and were also similar to that found in the younger age group of vaccinees. There was also a strong Th1 CD4 cytokine response to S-specific peptide pools, where TNF-α responses were greater than IL-2 responses, which were greater than the IFN-γ responses. Low levels of CD8+ T cell responses were detected. The authors conclude: “Overall, these preliminary findings show that in a small group of participants, adverse events associated with the mRNA-1273 vaccine were mainly mild or moderate in older adults, a group that is particularly at risk for illness and death from Covid-19”.