Interim analysis was performed 21 days after individuals received the 1st vaccine in a double-blind, randomized, placebo-controlled phase III trial. Though these results are exciting given the short period within which the vaccine has developed, results must be taken with caution as this an interim analysis after a short follow-up period and results have not been published in a peer-reviewed journal.

What safety and immunogenicity data is available for the Sputnik V vaccine? Researchers published their results of the phase I/II vaccine trial in the Lancet (Logunov et al., 2020) on the 4th of September 2020. 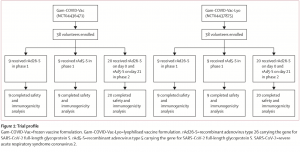 “Two open, phase 1/2 non-randomised trials of two formulations of the vaccine (frozen and lyophilised) were tested on healthy adults. In phase 1 of each study, we administered intramuscularly on day 0 either one dose of rAd26-S or one dose of rAd5-S and assessed the safety of the two components for 28 days. In phase 2 of the study, which began no earlier than 5 days after phase 1 vaccination, we administered intramuscularly a prime-boost vaccination, with rAd26-S given on day 0 and rAd5-S on day 21.” Source: Logunov et al.,2020

Overall the vaccine was safe, with “the most common systemic and local reactions pain at the injection site (44 [58%]), hyperthermia (38 [50%]), headache (32 [42%]), asthenia (21 [28%]), and muscle and joint pain (18 [24%])”. Immunogenicity results from the phase 1 study showed that a single dose of either rAd5-S and rAd26-S induced robust Ab and cellular immunity which was unaffected by vaccine formulation (frozen or lyophilised). Interestingly, researchers decided to test a rAd26-S prime followed by rAd5-S boost 21 days later and showed that this formation induced superior vaccine immunity compared with a single dose. However, despite reporting induction of robust cellular immunity, they presented cellular data as a fold increase of IFNg+ CD4 or CD8 T cells instead of concentration of frequencies of IFN-γ+ T cells and provided no reference point for responses in convalescent patients. 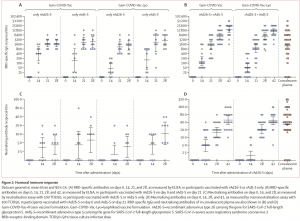 They did highlight that limitation of their study included a short follow-up period (max of 42 days) and small sample size. Despite this, illustration that a lyophilised vaccine works just as well as a frozen vaccine is good news for low resources regions.