GET OUR MONTHLY NEWSLETTER
Immunopaedia > Breaking News > Researchers may have found a way to “cure” cat allergies?

Researchers may have found a way to “cure” cat allergies? 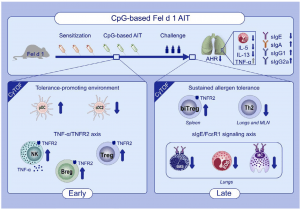 Many people across the world are allergic to cats, or more specifically to the major cat allergen Fel d 1, a protein typically found in their saliva, glands, skin and fur. Cat allergies are typically treated using pharmacotherapy which reduces symptoms rather than cure allergy. This type of therapy is very effective for individuals with mild cat allergies. However, it has lower effectiveness in moderate to severe cat allergies. Allergen-specific immunotherapy (AIT), still in the development phase, would ensure an effective and longer-lasting treatment in individuals with severe allergies. The goal of AIT in allergy is to induce long-term immune tolerance by downregulating Th2 cell-driven immune responses through allergen-specific regulatory lymphocytes. Researchers hypothesized that the most effective cat AIT may be achieved by optimizing regulatory T- and B-cell responses with the induction of blocking antibodies against Fel d 1 through immune adjuvants. AIT is usually administered by subcutaneous injections of gradually increasing allergen titres [concentration] until a critical dose that induces long-term immune tolerance is achieved. Researchers from the Luxembourg Institute of Health (Department of Infection and Immunity) aimed to boost immune tolerance to the major cat allergen Fel d 1 by increasing the anti‐inflammatory activity of AIT with the established immunomodulatory adjuvant CpG, but at a higher dose than previously used in AIT. They specifically chose high doses of CpG because it promotes regulatory T cell-induced immune tolerance.

Scientists used an injection of the endotoxic free Fel d 1 allergen in combination with a high dose of CpG adjuvant, in Fel d 1-allergic mice, both in the presence and absence of AIT. Researchers demonstrated AIT therapy results in a significant increase of plasmacytoid dendritic cells at the AIT injection site and lymphoid organs early in CpG-based AIT. Plasmacytoid DCs can skew naïve CD4+ CD25− T cells toward CD4+ CD25+ FoxP3+ Tregs, which we confirmed by an increase in Tregs. CpG can also provoke B cells to proliferate, to secrete IL-10 via CD11b+ regulatory B cells, and to differentiate into plasma cells and memory B cells. Despite detecting an increase in regulatory B cells, we were unable to measure changes in IL-10 or TGF-β secretion in vivo, although both cytokines have been suggested to mediate tolerance in AIT18,39 and protective effects of CpG. During the early phase of CpG-based AIT, we found a rapid induction of NK cells with a TNF-α/TNFR2 profile.” Researchers suggested that TNF-α/TNFR2 promotes differentiation and activity of regulatory T cell (CD25+ FoxP3+ CD4 T cells) which they observed during CpG-based AIT.

In summary, researchers demonstrated that AIT with high‐dose CpG in combination with endotoxin‐free Fel d 1 reverts all major hallmarks of allergy. These findings suggest a role of the CpG adjuvant in improving AIT induced allergen‐specific tolerance in patients with cat allergy or other allergic diseases.

NB: text in italics are excerpts from the Leonard et al., 2020. Manuscript.