Repurposing of a drug for alcoholism to treat cancer 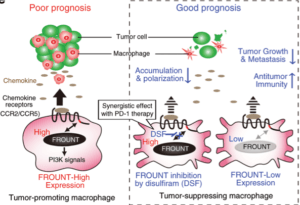 Cancer morbidity and mortality is increasing globally, with unexpected high prevalence in lower-middle income countries. Developing a therapy to combat cancer is very challenging, because cancerous cells use the host’s own immune system to grow and spread. An example of such a mechanism is recruitment of macrophages by cancerous cells to the tumour microenvironment. Functional activity by these tumor-associated macrophages (TAMs) contribute to an immunosuppresive micro-environment that inhibits killing of cancerous cells. TAMs have been associated with poor prognosis of cancer patients on immunotherapy. Thus a potential cancer therapeutic strategy would be to regulate TAMs.

A research group led by Yuya Terashima from the Tokyo University of Science saw this as an opportunity to explore the realm of developing novel anti-cancer drugs. Their seminal work in Nature Immunology 2005 reported the discovery of a new cytoplasmic protein called FROUNT. FROUNT binds to CCR2 and CCR5, chemokine receptors that have been shown to facilitate recruitments of TAMs to tumors. The team decided to expand on these findings, by investigating whether a therapeutic strategy can be formulated and have published their findings in Nature Communications. Through animal experiments, the researchers found that by regulating FROUNT expression in TAMs, cancer growth could be suppressed.

The team screened 131,200 compounds and zeroed in on disulfiram, a drug used to treat alcoholism, and known for its potential as an anti-cancer drug. This drug was found to directly bind to the FROUNT blocking FROUNT-CCR2/CCR5 interactions. Terashima explained that, “When tested on mice, disulfiram inhibited the movement of macrophages and suppressed the growth of cancer cells. Therefore, our findings present a new cancer treatment strategy that can suppress the growth of cancer cells that are difficult to respond to immune checkpoints…” They further showed that combined use of disulfiram and anti-PD-1-checkpoint inhibitor antibody (Ab) greatly improved anti-cancer cytotoxic T cell activity, compared to monotherapy. Suggesting that disulfiram can not only be used alone, but also in combination with other cancer immunotherapies.

The team is now further pushing the boundary of the finding and has started clinical research on the utility of disulfiram as potential therapeutic in combination with anti-PD-1 Ab.

About Dr. Terashima from Tokyo University of Science

Dr. Yuya Terashima is a junior associate professor at the Department of Biological Sciences, Tokyo University of Science. He discovered a chemokine signal regulator FROUNT which directly binds to the receptor, and has been studying for the family of the chemokine-receptor associating molecule, aiming for therapeutic applications of their functional inhibitors. He works with his team to understand the molecular mechanisms of living organisms with a specific perspective on inflammation and immunology, and drug discovery.