Depending on environmental and physiological conditions, the T cells of the body can identify and remove/destroy cancerous cells. However, in the majority of cancer patients, T cells lose function once present within the tumour microenvironment and within the tumours surrounding environment. Cancer immunotherapy is focused on reinvigorating T cells so that they may identify and continue to battle foreign cancer cells. Research in this field has primarily focused on stimulating T cells directly. In a recent study by researchers at MIT, Duong, et al., have identified a potential approach to indirectly activate T cells, through the recruitment of a helper immune cells i.e. dendritic cells (Figure 1). They identified a specific subset of dendritic cells that activate T cells via a unique mechanism. Through the expression of tumour proteins on their surface, dendritic cells impersonate cancer cells and subsequently trigger a strong T cell immune response. 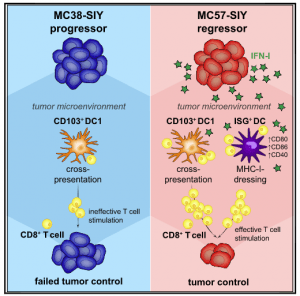 Dendritic cells have been reported to activate tumour-fighting T cells, but there exist several varying subtypes of dendritic cells, and how they affect T cells and their activation states has not yet been fully elucidated. As they said, “Tumour-infiltrating dendritic cells (DCs) assume varied functional states that impact anti-tumour immunity.” The present study aimed to characterise the function of some of these subtypes.

In order to conduct their investigation and elucidate the difference between the DC states associated with productive anti-tumour T cell immunity, they compared spontaneously regressing and progressing tumours in mice. What they found was that tumour-reactive CD8+ T cell responses in Batf3−/− mice lacking type 1 DCs (DC1s) were lost in progressor tumours but preserved in regressor tumours (Figure 2). 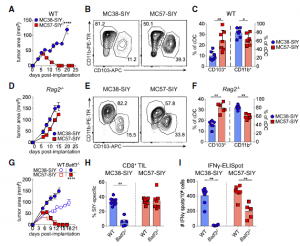 The best described type of dendritic cells required for anti-tumour immunity are DC1 cells, which interact with T cells that target cancer cells. Interestingly it was reported that DC1 cells are not essential for tumour regression. Through the use of scRNAseq, (Figure 3), the authors were able to identify a previously unknown activation state of DC2 cells, another subset of dendritic cell, that was driving T cell activation in the regressing tumours. They found this through investigating intra-tumoral DCs within regressor tumours revealing CD11b+conventional DCs (DC2s) characterized by expression of interferon (IFN)-stimulated genes (ISGs) (ISG+DCs). 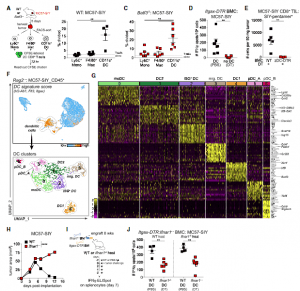 Interferon and its variations have been used to help fight cancer cells, however widespread side effects may occur when used chronically. As described in this study, delivering interferon in a targeted way to tumour cells, or to use a drug that would provoke tumour cells to produce type I interferon would be greatly beneficial.

Noting some limitations of the study, the authors wrote:

“While our comparative model of a regressor and a progressor tumour facilitated the study of stimulatory DC states, it also has limitations. To broaden our findings, we screened additional murine tumour lines and found that our observations could be extended beyond our model system. Moving forward, it will be critical to assess for ISG+DCs in additional murine tumour models and, more importantly, to establish the relevance of ISG+DCs in human tumours. Nonetheless, our study demonstrates that IFN-b can be used to induce ISG+DCs in poorly immunogenic murine tumours, and it will be interesting to determine whether this therapeutic implication holds true in the human setting.” (Duong, et al., 2021).