The coronavirus disease 2019 (COVID-19) pandemic has posed a significant challenge to both the scientific and clinical research communities. The pandemic has in many ways exposed the shortcomings of our approach to tackling the emergence of infectious diseases and in our understanding viruses. In addition, although beneficial for scientific growth, the pandemic has brought to the forefront the gaps existing in global healthcare systems and therapeutic practices.

Although numerous studies have been conducted since the emergence of SARS-CoV-2 investigating the innate and adaptive immune responses to viral infection and vaccination in different clinical cohorts, most of these studies excluded lactating and pregnant women. In addition, it is important to note that pregnant women were not included in the clinical trials that led to the approval of the mRNA-1273 and BNT162b2 COVID-19 vaccines.

Pregnancy is a fascinating event that researchers, to this day, do not yet fully understand. A unique and significant experience that is cherished around the world, pregnancy exists as a life changing event for many. One of the fundamental requisites for a healthy pregnancy involves the development of physiological tolerance of the maternal immune system to the semiallogenic (sharing some but not all genes i.e. sharing genes of the father and mother) fetus. Several changes in innate and adaptive immunity in pregnant women make them more susceptible to infection by influenza and SARS-CoV-2. Efficient and appropriate vaccination can therefore protect pregnant women directly and the fetus through the passive transfer of antibodies.

Passive transfer of antibodies occurs through the placenta and breastmilk that equips the fetus with a host of functional immunoglobulins (Ig) (For more: SARS–CoV-2 infection of the placenta). Maternal IgG is transferred to the fetus by binding to the Fc-domain receptors (FcRs) located on the surface of the syncytiotrophoblast cell (multinucleated) layer overlying the placenta. The neonatal Fc receptor (FcRn) is the pri-mary placental IgG transfer receptor, but other placentally-expressed Fcγ receptors also modulate transfer efficiency. Transplacental transfer and differential glycation of the antibody Fc-domains is dependent on antibody-FcR binding which has a significant influence on the quantity of antibody transferred. Following parturition, mothers transfer IgA-isotype antibodies through breastmilk, which can protect infants against enteric and respiratory infections. Once in the neonatal circulation, maternal antibodies can coordinate diverse immune functions. These include direct antigen neutralization and non-neutralizing, cell-mediated functions (Figure 1), many of which are orchestrated by FcγRs. In short, the method of antigen exposure dictates the constituents of the antibody repertoire. 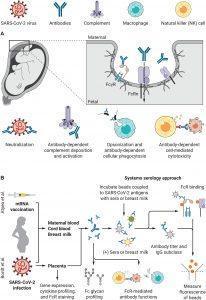 In one of the highlighted studies (article one), Atyeo, et al., investigated the serology phenotype of anti-SARS-CoV-2 antibodies in the sera of pregnant, non-pregnant, and lactating women subsequent to administration of mRNA-1273 or BNT162b2 COVID-19 vaccines. They reported that pregnant women presented with lower SARS-CoV-2 antibody titers, restricted IgG subclass responses, and a decreased FcR binding capacity following the first dose of the vaccine as compared to non-pregnant women. However, little difference was observed following the second dose between pregnant and lactating women and non-pregnant women. Specifically, in the case of lactating women, increased natural killer (NK) cell-activating antibodies were observed following the second dose of vaccination.

It is interesting to note that there were differences in responses to the varying formulations of each mRNA vaccine. This was observed in pregnant women. For those receiving the mRNA-1237, the immune responses were enriched for neutrophil and NK cell-recruiting antibodies. Contrastingly, BNT162b2 displayed enrichment for less specific IgG1 and FcRϒIIIa-binding antibodies.

With regards to passive immunity, SARS-CoV-2 antibodies were observed in a higher concentration in maternal sera as compared to cord sera. This could be dependent on the fact that immunisation was conducted at a later stage of the pregnancy. In addition, the reduced transfer efficiency may be caused by the decrease in FcRϒIIIa-binding antibodies in pregnant women. Contrastingly, in the case of lactating women, higher antibodies with greater functional and FcR-binding qualities were observed after vaccination.

In the second study, Bordt, et al., investigated the antibody and antiviral interferon responses in COVID-19 infected and uninfected pregnant women. They compared whether these responses were dependent or affected by the sex of the fetus. They quantified the anti-SARS-CoV-2 antibody titers and characterised the functions and identified specificities in maternal and cord blood sera of pregnancies with female and male foetuses in order to determine the effect of fetal sex on the antibody response.

It was reported that women carrying male fetuses had lower titers of IgG antibodies for all SARS-CoV-2 specific antigens. Suggesting that the fetal sex affects the maternal antibody responses. In addition, it was reported that the the transfer ratio of SARS-CoV-2 antibodies was lower in cord blood for male pregnancies when compared to female pregnancies.

In order to determine whether sex-specific differences in placental FcR expression existed, the researchers carried out placental staining and genome analyse. They reported an increased expression of FcRn, FcRϒII, and FcϒRIII, as well as increased co-localization of FcRn and FcRϒIII in the case of the male-derived placenta. Glycan profiling revealed that in the case of male pregnancies, higher titers of antibodies were modified by glycosylation and fucosylation. Fucosylated antibodies are less efficiently transferred by the FcRϒIIIa-binding that explains the lower IgG transfer in the case of male pregnancies.

In conclusion, researchers have been effective in determining the antibody responses of pregnant women infected with SARS-CoV-2 and the effect of the fetal sex on these responses. This highlights the importance of including pregnant women at different gestational ages/trimesters in clinical trials to guide the development of vaccines. Furthermore, these studies help us to understand the effects of COVID-19 infection and immunisation during pregnancy, which may help us further our understanding of vaccine development and the immune response during pregnancy.

NB to note: The articles referenced in this summary with the exception of the main review are made available on a preprint server which publishes preliminary scientific reports that are not peer-reviewed and, therefore, should not be regarded as conclusive, or guide clinical practice or treated as established information.