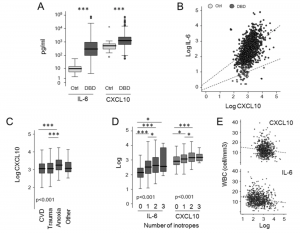 An Italian research team has recently shown that immune markers are able to predict the viability of grafts taken from donor patients who have suffered brain death. Successful organ transplantation from deceased donors has improved with recent advances, although long-term survival of grafted tissue is low with 15-25% of graft loss within 5 years of surgery. During and after brain death, circulation slows and immune cells adhere to the inner linings of the blood vessels. Here, the immune cells become activated and release numerous inflammatory mediators. As a result of this, organs from patients who have suffered brain death may lose their functioning at an accelerated rate when compared to organs taken from living donors. Using two of these mediators, CXCL10 and IL6 (both cytokines which have numerous functions such as increasing body temperature or attracting immune cells to sites of damage), this group showed that these were significantly higher in serum from patients who had suffered brain death and that these could be used a negative predictors of transplant survival. This groups hopes that routine measurement of these markers in patients who are donating tissue could lead to new metrics to predict graft success in the future.