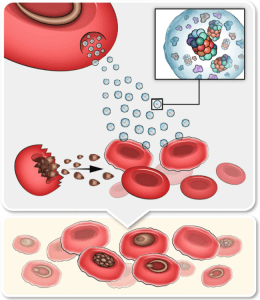 Diagram demonstrating the impact of Pf-derived EVs on naïve RBCs. Our results indicate that EVs enriched with active proteasome complexes and protein kinases invade naïve host RBCs. This process leads to the phosphorylation and subsequent degradation of RBC cytoskeleton proteins. Consequently, the cytoskeleton network of the recipient naïve RBC is disrupted and the cell membrane is remodeled, improving the invasive capacity of the malaria parasite. (Source: Dekel et al., 2021)

Red blood cells (RBCs) extrude all their organelles during maturation and completely rely on their internal protein pool during their about 120 days of life in our circulation. They are also equipped with a dynamic remodeling ability of their cytoskeleton to alter their shape, which facilitates the passing through the smallest capillaries of the human body. This makes them unique host cells for pathogens such as the malaria parasite Plasmodium falciparum (Pf). It is well known that Pf is able to modulate the RBC’s membrane stiffness and activate a phosphorylation cascade that includes RBC cytoskeletal proteins. However, it was still unknown whether Pf is able to remodel naïve surrounding RBCs in preparation for invasion while growing inside their host RBC.

Dekel et al. examined the physiological role of Pf-derived extracellular vesicles (EV). Therefore, they purified vesicles from RBCs infected with the NF54 parasite line, analyzed the protein content of these vesicles and introduced them to naïve RBCs. The mechanical properties of the RBCs were examined with an Atomic Force Microscopy-based approach. The protein content of the vesicles was analyzed by (phospho-)proteomics and results were confirmed using Western Blot analyses. The functionality of the 20S proteasome was assessed using fluorogenic proteasome substrates.

Treatment of naïve RBCs with EVs derived from malaria-infected RBCs led to significantly improved parasite growth. When further analyzing the EVs protein content, the authors found various parasitic and host kinases together with a fully functional 20S proteasome encapsulated within the vesicles. These 20S proteasomes are employed by Pf to increase RBC membrane deformability and to disturb the structural integrity. This is achieved by phosphorylation of four proteins in the RBC cell cortex subsequently targeting them for degradation by the EV 20S proteasome. These processes are considered as priming of the naïve host RBCs for invasion by the malaria parasite.