The immune system plays a key role in regulating the growth of and eradicating cancer cells. Designated elimination, equilibrium and escape describe the three phases of immune surveillance of tumours. An immune-suppressive microenvironment is beneficial for tumour escape, which can also be triggered by hypoxia followed by localized expression of immune suppressive cytokines like transforming growth factor-beta. Accumulation of immune cells with suppressive functions, like regulatory T cells or M2 macrophages, leads to the inhibition of natural killer (NK) and CD8+ cytotoxic T lymphocyte function (Read – Tumour Microenvironment).

A transmembrane glycoprotein, CD47 (integrin-associated protein (IAP)), which is ubiquitously expressed, acts as a ‘marker of self’ and plays an important role in hematopoiesis. Upon binding to CD47-ligand SIRPα, expressed on macrophages and dendritic cells, phagocytosis of target cells is inhibited. In layman’s terms, in order to protect healthy cells from its own immune system, a protective shield has been developed, i.e. CD47 is a “don’t attack me” signal, which inhibits the immune system. CD47 protects healthy cells from macrophage attack by binding to signal regulatory protein (SIRPα), while its up-regulation in cancer prevents immune clearance. This mechanism is exploited by tumour cells as a protection strategy for evading the immune system, by increasing presentation of CD47 on their cell surface. Researchers have now developed a novel therapy concept for programming the tumour cells to produce a CD47-blocking and immune-activation fusion protein in the hope that this will halt tumour growth.

Macrophages and other immune cells present with the ligand for CD47, namely SIRPα. Upon activation, following binding of SIRPα to CD47, a signal is transmitted which prevents the killing of the target cell. Through the production of CD47, tumour cells evade the immune system and therefore remain untouched. Current tumour therapies include using antibodies to block the action of CD47 and subsequently activate immune cells for tumour eradication. However, this approach may be harmful due to the effect on healthy organs and other tissues.

Billerhart, et al., amongst others, demonstrated that the tumour-restricted expression of secreted therapeutic proteins can be a vital approach, which also allows a potent bystander effect on adjacent, non-transfected cells in the near vicinity. Through the utilisation of a synthetic gene delivery system, systemic application of plasmid vector, researchers were able to achieve a significant increase in TNFα expression in implanted tumours (Figure 1). 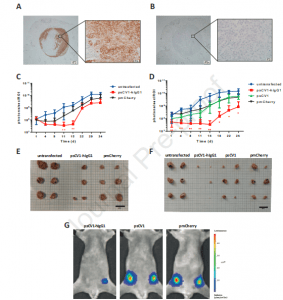 For the present study, Billerhart, et al., designed a gene vector encoding for a secreted fusion protein having high affinity SIRPα variant CV1 coupled to a IgG1 Fc part with maximized CDC and ADCC activity. Secretion is accomplished by the interleukin-2 (IL2) secretion signal, which resulted in a potent bystander effect even at very low transfection efficiencies. To explaom this, CD47 was successfully blocked not only on tumours cells producing the fusion protein but also on the tumour cells in their vicinity. Through the use of this method selective blocking of CD47 in cancer cells was achieved which would lead to immune cell activation and tumour cell eradication (Figure 2).

Schematic representation of CD47-targeted cancer immunogene therapy approach. 1) Polyplexes formed by linear polyethylenimine (LPEI) and plasmid DNA encoding for sCV1-hIgG1 are internalized by tumor cells via adsorptive endocytosis; 2) sCV1-hIgG1 fusion protein is expressed and secreted into the intercellular space; 3) sCV1-hIgG1 blocks CD47 on transfected and adjacent tumor cells and inhibits its interaction with SIRPα on immune cells; 4) the Fc part of sCV1-hIgG1 binds to Fc receptors on macrophages, DCs, neutrophils and NK cells activating both the innate and the adaptive immune system; this together allows the eradication of tumor cells by immune effector cells (Billerhart, et al., 2021).

The authors concluded in their own words:

“In conclusion, it can be stated that within a cancer gene therapy approach, the tumour-restricted expression of a secreted, highly effective CD47-blocking protein in conjunction with an Fc part for maximized ADCC and CDC can result in a potent antitumoural response concomitant with activation of both macrophages and NK cells.”