GET OUR MONTHLY NEWSLETTER
Immunopaedia > Breaking News > Nasal spray immunisation: potential use against HIV and SARS-CoV-2 shown in an animal models

Nasal spray immunisation: potential use against HIV and SARS-CoV-2 shown in an animal models

To achieve effective immunisation and induce humoral immunity and systemic antibody responses at the entry to mucous membrane sites, novel and innovative methods are constantly being tested to provide protection for individuals from emerging and existing pathogens. Such pathogens include that of the new SARS-CoV-2 virus and existing ones such as HIV. Several studies have shown that HIV, SARS-CoV-2 and other viruses, are dependent on both the systemic and mucosal immune response in order to combat infection and provide protection for the individual, with the induction of IgA and IgG.

Common immunisation techniques do not induce sufficient mucosal immunity. In a recent paper by Hartwell, et al., the researchers tested whether albumin-binding amph-vaccines would enable and enhance FcRn-mediated vaccine uptake within the nasal mucosa (Figure 1). In his paper, researchers modified protein antigens geared towards systemic and mucosal immune responses which are induced by intranasal vaccination in small and large animal models. They then assessed the level of induction of the systemic and mucosal immune response using fluorescently labelled proteins. 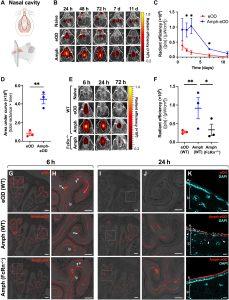 In this paper, they were able to show the benefits of using modified antigens such as amph-protein immunogens which showed enhanced uptake by nasal mucosa and induction of follicular helper T-cells (Tfh) and other immune responses. They also described the induction of neutralising antibodies against SARS-CoV-2 and HIV using variations of amph-protein which were conjugated with respective viral proteins.

Although this study is limited through the immunological difference that exists between animal models and humans, it highlighted the potential of intranasal delivery of amph-protein vaccines especially as we combat viruses such as HIV and SARS-CoV-2.