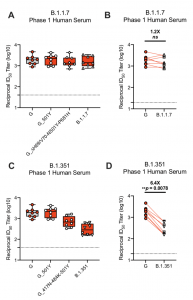 Neutralization of B.1.1.7 and B.1.351 SARS-CoV-2 pseudoviruses by serum from mRNA-1273-immunized Phase 1 participants. mRNA-1273 Phase 1 trial participant sera were collected on day 36, 7 days after the boost. Neutralization was measured by a recombinant VSV- based PsVN assay that incorporated D614G or the indicated spike mutations present in the B.1.1.7 variant (A-B) or B.1.351 variant (C-D). (A,C) Min to max box plots, with the box from 25- 75% and the median value denoted by the line. (B,D) Results from individual participant sera is represented as dots on each figure, with lines connecting the D614G and variant neutralization titers. The horizonal dotted lines indicate the lower limit of quantification (LLOQ). G=D614G

Reports of SARS-Cov-2 variants B1.1.7 and B.1.351 that contain multiple mutations are causing major concern for an immune escape from naturally- and vaccine- induced immunity. Both variants have mutations in the receptor-binding domain of the SARS-CoV-2 spike protein and are associated with much higher transmission rates than the D614G variant. Studies thus far, suggest that the N501Y mutation, present in both variants B.1.351 and B1.1.7, does not affect the neutralisation capacity of BNT162b2 vaccine-induced immunity (Xie et al. Pre-print). However, the E484 mutation (present in B.1.351) did negatively affect the neutralisation capacity of SARS-CoV-2 antibodies from convalescent individuals (Greaney et al., Pre-print). A caveat of both studies was they did not measure the combined effect of all mutations present in each variant.

A recent study by Wu et al. assessed the neutralisation capacity of sera from mRNA-1273 phase 1 trial participants (n=8) and non-human primates immunised with mRNA-1273 against the original D614 S, the dominant G614 S, mutations in 20E, 20A.EU2, mink cluster 5, N439K-D614G, and either the full panel or single and a subset of mutations found in the B.1.1.7 and B.1.351 variants (Wu et al., Pre-print). This summary shall focus on assay results on the B1.1.7 and B.1.351 as they have a much higher transmission rate than other variants and in the case of B1.1.7 may be associated with an increase in disease severity. Wu et al. demonstrated that mutations in the B1.1.7 did not affect the neutralisation capacity of mRNA-1273-vaccine induced immunity, a finding also observed by others. Unfortunately mutations in the B.1.351 variant drastically reduced the neutralisation capacity of vaccine-induced antibodies. This reduced effect could be partially attributed to the K417N, E484K and N501Y mutations. Fortunately, no viral escape was observed. Authors conclude that:

The emergence of variants and the ability of the virus to partially overcome natural or vaccine-induced immunity does serve as a call to action, pointing to the need for continued efforts to vaccinate with the currently approved mRNA regimens to prevent the emergence of future variants that may further evade immunity.

These results are very worrying, particularly for regions in Africa e.g. South Africa where the B.1.351 is likely transmitting quite rapidly. It further highlights the importance of determining whether immunity induced by other vaccines e.g ChAd-Ox1 (Oxford/AstraZeneca) is effective against such variants.