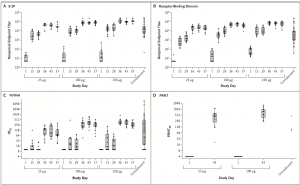 Safety and immunological results from the phase 1 COVID-19 trial testing, the candidate vaccine mRNA-1273, were published in NEJM on 14th July. mRNA-1273 is a lipid nanoparticle–encapsulated, nucleoside-modified messenger RNA (mRNA)– based vaccine that encodes the SARS-CoV-2 spike (S) glycoprotein stabilized in its prefusion conformation. The phase 1 clinical trial, which aimed to determine the safety profile of mRNA-1273 began in March 2020 (66 days after the genomic sequence of the virus was posted). Overall vaccination with mRNA-1273 did not result in severe side-effects, however, the frequency of side effects correlated with vaccine antigen concentration.

In summary, results from the phase 1 mRNA-1273 vaccine trial, though preliminary, clearly indicate that the mRNA-1273 vaccine is safe and immunogenic. Warranting further investigation in a phase 2 trial, which has already began, NCT04405076.