Parkinson’s disease (PD) and dementia are two of several varying synucleinopathies with Lewy bodies (DLB) which are are defined by the presence of intraneuronal cytoplasmic inclusions called Lewy bodies (LB). LBs are rich in an aggregated form of the protein α-synuclein (α-syn) (Further reading: Propagation of α-synuclein from the gut to brain – new causation for Parkinson’s disease?). Primarily produced in the neurons, α-syn is a 14 kDa protein with no defined structure. This protein is expressed in its monomeric form under pathological conditions subsequently leading to the formation of oligomeric structures and insoluble fibrillar assemblies that, together with crowded organellar components, accumulate in LBs. Increasing the clearance of α-syn and lowering the accompanying protein accumulation may be a promising therapeutic strategy for the treatment of synucleinopathies.

Microglia are the primary innate immune cells (background snapshot: The Innate Immune System) of the brain and play a crucial role in mediating cerebral homeostasis. This is achieved through the clearing of cellular debri and provision of neurotrophins following detection of changes in the cerebral environment. Upon ligation of pattern recognition receptors (PRRs), microglia become activated and execute an inflammatory response that, in case it persists, causes chronic neuroinflammation and neuronal damage. An example of a chronic neuroinflammatory response can be found in brains of PD patients and other synucleinopathies, where microglial activation occurs in all brain regions where aggregated α-syn accumulates. The aggregation of α-syn accumulations within the brain in conjunction with the activation of microglial cells, represents key pathological hallmarks of synucleinopathies.

Researchers have made significant efforts in elucidating the mechanisms underlying the regulation of α-syn clearance in microglia. The exact mechanism for the clearance of α-syn remains unclear. Researchers from the University of Bonn, the German Center for Neurodegenerative Diseases (DZNE), and the Institut François Jacob in France have now identified a mechanism that addresses both problems of α-syn accumulation and microglial degradation. Scheiblich, et al., examined how the microglial cell population deals with the clearance of α-syn fibrils and whether microglial survival is affected upon exposure to fibrillar α-syn. They reported that microglia form an ‘‘on-demand’’ functional network enabling them to share the burden of aggregated a-syn degradation. The mechanisms are described in summary in Figure 1 below. 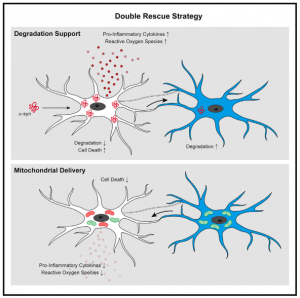 In this present study, the researchers suggested that the microglial cell population would approach the removal of these aggregations together as a whole forming tube-like projections that dock onto neighbouring microglial cells. The connections are then used to distribute α-syn aggregates amongst all cells within the network. Without this “division of labour,” individual immune cells would be overwhelmed.

The other function of these networks is to increase the efficiency of distressed microglial cells, through the provision of mitochondria to neighbouring cells that are in the process of degrading aggregations. The donation of mitochondria attenuates the inflammatory effects of microglial activation.

In certain mutations, more frequently found in patients with PD, both α-syn and mitochondrial transport are impaired. This can also be seen in other diseases such as Lewy body dementia. Researchers have isolated marcophages from blood samples of affected individuals and subsequently converted them into microglia-like cells with the help of specific regulatory molecules. As stated by the authors, “these cells were still able to form networks in the lab. However, the transport of α-syn through the connecting tubes was severely impaired.” This mechanism of transport remains to be investigated for more clarity.

The identification of the microglial cell network that is formed is a novel finding. This finding may open up new therapeutic perspectives for neurological disorders such as Parkinson’s disease or dementia as well as further research into this interesting mechanism.