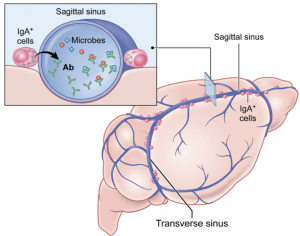 Historically the central nervous system (CNS) has been considered as an immune-privileged site. However, research has shown that this is not the case, as immune cells are detectable in the meninges*. In the context of meningeal-associated humoral immunity, it is assumed that antibodies found in the meninges are of systemic origin and enter the meninges in response to pathology. “A recent study extended this paradigm, identifying gut-derived IL10-producing IgA+ plasma cells within the brain and spinal cord during inflammation in a mouse model of multiple sclerosis (Rojas et al., 2019)”. Thus of a recent article, Fitzpatrick et al., aimed to profile steady-state meningeal humoral immunity and investigated the induction of humoral in the meninges.

In their study, they showed that meninges of “healthy, unchallenged” mice have detectable that IgA-secreting plasma cells. Thus, illustrating that the presence of IgA+ plasma cells in the meninges is not only a consequence of pathology but a homeostatic process as well. Since maintenance of IgA+ is dependent on the gut microbiome, researchers wanted to determine if the gut played a role inducing and maintaining meningeal- IgA+ plasma cells. Plasma cells found in the meninges are of gut origin. Where following the priming of B cells in a microbiome dependent, mature B cells then translocate to the meninges where they undergo further differentiation into plasma cells. They also showed that upon systemic challenge with candida sp.,  infection in the brain is limited by IgA+ plasma cells that readily proliferate and secrete IgA contributing to increased fungal entrapment.

Researchers thus concluded that “meningeal IgA+ plasma cells represent a crucial immunological shield that is assembled during homeostasis and poised to prevent the spread of pathogens into the meninges and underlying CNS parenchyma.”

* The meninges consist of three membranes that provide a protective covering to shield the CNS from physical trauma and pathogen infiltration.