MAIT cells – a new target for future immunotherapies and vaccines

In a recent study, researchers have demonstrated that mucosal-associated invariant T (MAIT) cells, a form of immune cells, play several complex roles during diseased and healthy conditions (Figure 1). The results provide a foundation on which to develop research on MAIT cells, using them as targets for immunotherapies and vaccines. 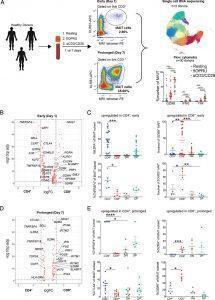 MAIT cells are extremely abundant in the human body. They can be activated by non-peptide vitamin intermediates from microbes and are involved in both infectious and non-infectious diseases mechanisms and process.

In this present study they made use of single cell RNA sequencing technology as well as other immunologic techniques to identify one cell type with a semi-invariant T cell receptor, further demonstrating MAIT cell heterogeneity that places emphasis on conventional T cell biology. They also demonstrated this heterogeneity in response to infection with M. tuberculosis in humans (Figure 2). 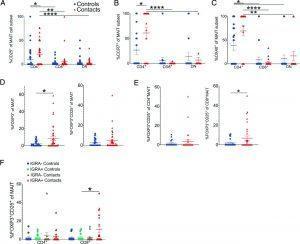 The researchers reported that the heterogeneity of MAIT cells includes distinct CD4+ and CD8+ populations, in addition to killer, helper, and regulatory cell phenotypes. This highlighting the complexity of MAIT cells and their function.

“In summary, we present an integrated transcriptional and immune landscape of human MAIT cell activation at single-cell resolution. Our results provide a detailed analysis of novel MAIT cell clusters defined by early and prolonged stimulation, including distinct CD4+ and CD8+ MAIT cell signatures. We also show that these phenotypes are recapitulated in the setting of early M. tuberculosis exposure and infection. This functional map of MAIT cell activation biology will help inform future investigations into how MAIT cells specialize in healthy and disease states.”