IUIS Webinar: Impairment of the immunological and neurological synapses by respiratory viruses

This article summarises the last IUIS COVID-19 webinar which featured a talk by Alexis Kalergis on “Impairment of the immunological and neurological synapses by respiratory viruses.” and the implications for the design of vaccines .

He began his talk emphasising the importance of vaccines and their role in controlling and reducing the incidence of disease. He also showcased the Museum for Immunology & Vaccination (see youtube video). Highlights of his immunological talk include: 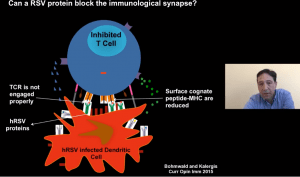 The role of dendritic cells (DCs) in priming cellular (classical T cell) immunity. He described how viruses interfere with DCs activity by blocking DC-T cell immunological synapses in viral infected DCs resulting in reduced T cell activation. He then described in detail how Respiratory syncytial virus (RSV) induce DC impairment. He then described how understanding RSV virulence contributed to the development of vaccines that are currently in human clinical trials. 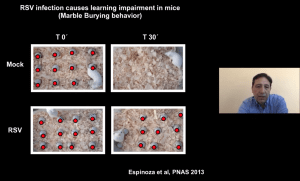 The end of his talk focused on describing current research on developing a SARS-CoV-2 vaccine, as well as research his group is conducting that aims to develop a vaccine that can induce immunity against SARS-CoV-2 nucleocapsid, envelope, membrane and spike proteins. 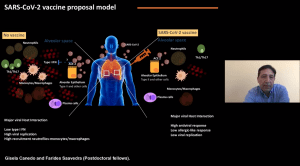