Indian population could have intrinsic immunity to resist COVID-19 challenge

The world is battling the most severe global outbreak (Pandemic) of recent times due to the novel coronavirus namely the Severe Acute Respiratory Syndrome virus 2 (SARS-CoV-2). It began with reports on mysterious pneumonia cases in Wuhan District of Hubei province, China in December 2019 with the first ever death by coronavirus disease 2019 (COVID-19) on January 11, 2020 there (1). Though most countries initially ignored this novel infection, the Indian health authorities including the Indian council of Medical Research (ICMR) became active immediately reporting the first laboratory confirmed case at the National Institute of Virology (NIV), Pune on January 30. India reported its first death of COVID-19 on March 11, two months later than in China (2). In a short span of time, COVID-19 has become a rapidly spreading communicable disease forcing the World Health Organization (WHO) to declare it as the “Public Health Emergency of International Concern” on January 30. As on April 16, 2020, the WHO pandemic update indicates a whopping 1,991,562 confirmed reported cases globally from nearly 213 countries/areas or territories with 130,885 confirmed deaths (2). 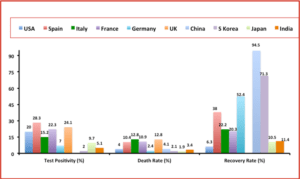 A striking variation in mortality rates has been observed across countries, ranging from 0.2% to ~15%. Incidentally, so far, the impact is more convincingly evident from countries in the Northern hemisphere (with minimal outliers) than those in the Southern and those positioned adjacent to the Equator (3). With few exceptions, the infection rate, severity and mortality are significantly overrepresented in countries like Italy, Spain, USA, UK and several others (Fig 1).

It is noteworthy that with over 300,000 nucleic acid-based tests already done, the positivity rate of cases in India with its densely-populated regions are stabilized so far around 4.6%, as compared to the much higher figures in hotspot European nations and the United States (~20% positive cases among tested ones). The lower test positivity rate in India with almost near lack of severe/critical cases and their limited mortality (~3.3%) appears both remarkable and encouraging. Till April 16, 2020, India reported a total of 12,759 infected individuals with 420 deaths, and 10824 active and 1514 cured cases (4).

Though several variables could conceivably be attributed to this observed population specific heterogeneity towards SARS-CoV2 susceptibility, progression and almost zero occurrence of severe COVID-19 cases, three factors are worth considering:

First, the broad-based immunity of the population due to the extensive microbial load and general exposure to a variety of pathogens could prime Indians immunologically for broad specific and/or cross-reactive memory T-cells, though mechanisms that need to be explored. Particularly, the three main killers of Tuberculosis, HIV and Malaria have plagued India, Africa and several countries in the Southern hemisphere much more than the European and North American nations. Further, the persistent usage of BCG vaccination in India since the late 1940’s could have provided a boost to develop robust innate and adaptive immunity against infectious agents and that could include the COVID-19 virus as hypothesized by others (7). At least two clinical trials are now underway at the instance of the WHO to explore the immunomodulatory potential of BCG in the context of SARS-CoV-2 virus. It may be noted that as of now, the WHO does not recommend BCG vaccination for prevention of COVID-19. Similarly, the beneficial role of chloroquine and hydroxychloroquine has been much talked about and debated (8), while there has already been an extensive usage of this drug at the community level in India — this too may ultimately prove beneficial.

The second and equally important factor is related to environment and food habits that may provide some degree of resistance to infection. Much literature exists in Ayurveda and other Indian systems of medicine on the definitive beneficial effects of Indian spices in augmenting immunity. For example, turmeric that contains curcumin (active compound polyphenol) is the most common food ingredient of the Indian kitchen. Curcumin is known to have antioxidant, anti-inflammatory, anti bacterial and wound healing properties. Several reports suggest its potential in treating arthritis, cancers, cardiovascular and inflammatory bowel diseases (9). Similarly, there is a long list of several other spices being used routinely as food ingredients in the Indian curry. The broad geographical diversity of the Indian sub-continent ranging from the Himalayan mountains to beaches and deserts and the variable climatic conditions along with a variety of lifestyle habitat across various regions and states of India add to the extra ordinary variability of its people. We anticipate that these epigenetic, environmental and lifestyle related factors could influence largely unexplored immunity against COVID-19 here.

The third very important factor is the issue of extensive HLA diversity of the Indian population with existence of several ‘novel alleles’ and ‘unique haplotypes’. For example, the allele families of HLA-A2, A33, B27, DR4 and many others present remarkable diversity with existence of several molecular subtypes including those that occur in Caucasians, Africans, Orientals and other population groups. Several of these could have occurred due to the prevailing microbial load and as a consequence of the racial admixture experienced in the Indian sub-continent for centuries. The novel subtypes with subtle nucleotide substitutions at the peptide binding domains of the HLA molecule are preferred in this population, perhaps as a natural requirement. One such example is HLA-A*02:11 with substitutions at position 73, 74 in ‘pocket C’ of the peptide binding groove of the HLA class I molecule. At least one-third of the HLA-A*02+ve Indians are known to carry this allele (10) while it is completely absent in Caucasoid and Oriental populations.

Similarly, an appreciably high genetic diversity has been observed in HLA class II haplotypic groups, several of which are disease associated. For example, the observed remarkable diversity of the HLA-DR3+ve autoimmunity favoring haplotypes in the Indian population has tremendous biological significance. Indeed, the classical Caucasian autoimmunity associated AH8.1 (A1-B8-DR3) haplotype is rare in Indians and is replaced by several other variant haplotypes including the most common, AH8.2 haplotype A26-B8-DR3 in India (11,12). This preferential divergence could be attributed to a survival advantage driven through diverse pathogenic challenges confronted by the Indian population over the course of evolution.

The observed HLA diversity of the Indian population could be attributed to microbial selection pressure, as a consequence of the founder effect resulting in the genetic drift. Though data is yet to emerge on the influence of HLA on SARS CoV2 susceptibility and severity at the population and individual level, higher genetic diversity enhances the probability of selecting HLA molecules with more efficient binding specificities to the SARS-CoV2 peptides and this could also compromise the viral replicative fitness.

Considering the COVID-19 trajectory in the Indian population so far, we anticipate specific natural advantages due to the distinct and interlinked levels of diversity; i) the evolutionary advantage conferred by the remarkable HLA diversity confers on the population specific adaptability to SARS-CoV-2 antigenic peptides to initiate immune response and may influence viral mutations in immunodominant conserved viral epitopes, leading to compromised viral replicative fitness, ii) high microbial pressure tuning and educating the regulatory immune responses against excessive inflammatory conditions while also establishing strong memory responses which could be cross protective against COVID-19 and, iii) geographical diversity, food and cooking habits which include routine use of natural antimicrobials viz. curcumin and spices with known specific protective immune properties against common cold and several other diseases confer additional protection.

The big question however is: Does this give Indians a better chance at fighting the virus effectively? From the epidemiological data so far, it seems so (although much more extensive research is required). Meanwhile, it is important for India to keep the viral loads in check and below the threshold levels through effective lockdowns. While the population specific heterogeneity and genetic diversity is the hallmark of evolutionary selection and immunity to novel pathogens, defining this differential vulnerability against COVID-19 and immune correlates of protection is critical and perhaps an important challenge for the immunologists. To this end, a plethora of therapeutic and vaccine approaches against coronaviruses are being explored and evaluated for safety and efficacy. A concerted and cooperative effort is needed at the global level towards unraveling the immune-pathogenic mechanisms through studying host-pathogen molecular interactions, viral mutations/recombination and others. The need at the moment is to define the immune correlates of protection for designing cost effective and more sensitive diagnostic assays, abrogating human-to-human transmission, repurposing available drug options as well as formulating novel therapeutic and preventive vaccine strategies.