GET OUR MONTHLY NEWSLETTER
Immunopaedia > Breaking News > Inclusion of non-spike proteins in SARS-CoV-2 vaccines may be important for the induction of protective T cell memory.

Inclusion of non-spike proteins in SARS-CoV-2 vaccines may be important for the induction of protective T cell memory. 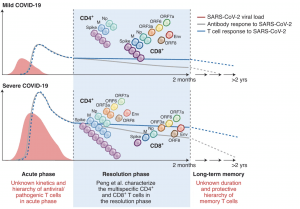 A recent study published in Nature Immunology shows the presence of SARS-CoV-2 specific memory T cell responses in patients recovered from COVID-19. The breadth and strength of SARS-CoV-2-specific T cell responses were higher in patients with more severe disease, which the authors postulate could be a result of higher viral loads or infecting inoculum. There was a high frequency of spike protein-specific CD4+ T cell responses in patients who had recovered from COVID-19. Six immunodominant epitope-specific regions were frequently targeted by recovering patients: three in the spike protein, two in membrane protein and one in the nucleocapsid protein (NP). Although there were higher CD4+ T cells in patients with severe disease, there was a higher proportion of CD8+ T cell responses in those with mild disease, which the authors suggest was “a potential protective role of CD8+ T cell responses in mild disease”. The majority of these epitope-specific memory CD8+ T cells were of the effector, central or early/intermediate differentiation phenotypes and there was a higher proportion of multi-cytokine-producing CD8+ T cells recognizing epitopes in M and NP proteins compared with spike. The authors conclude that “non-spike dominant CD8+ T cell epitopes suggests the potential importance of including non-spike proteins such as NP, M and ORFs in future vaccine designs.”