Immunosenescence: how does it affect vaccine Ab responses ? 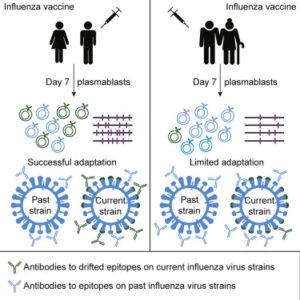 Immunosenescence, the gradual decline in immunity with age, is thought to contribute to high rates of microbial infection related morbidity and mortality in the elderly. It is due to this phenomena, that some countries have adopted revaccination in eldery adults to prevent/reduce potentially fatal infection episodes. Understanding the immunological features of immunosenescence is of great importance, as it will lead to improved medical interventions in the elderly.

Researchers (Henry et al.,) aimed to determine how “ageing” (Immunosenescence) affects influenza vaccine responses. They focused on flu-vaccine responses, as the highest adult flu morbidity and mortality occur in the elderly(older than 65 years). Since influenza virus undergoes both antigenic drift and shift, where the virus can gain minor mutations  or become new strains, respectively, the immune repertoire needs to adapt to such changes. Somatic mutation is a way in which B cells generate more specific and high affinity Abs, it is suggested that this process may be negatively affected by aging.

Henry et al., showed that elderly individuals (71-89 years) have reduced capacity to adapt, illustrated by lower numbers of somatic mutations in the antibody (Ab) genes than adults (22-64 years). They also showed that though the elderly had similar proportions of Abs, these Ab had lower neutralising capacity. Interestingly, elderly adults had higher proportions of cross-reactive Abs than adults, where 47% of the studied Abs were capable of binding more than 6 influenza strains. However, majority of these Abs bound to highly conserved epitopes, including epitopes from historical strains the elderly were exposed to in their childhood. These findings indicate that the elderly immune system is susceptible to original antigen sin (aka Hoskins effect). Where the body’s immune system preferentially generates immunological memory to antigens similar to those previously exposed to. This may result in directing generation of Abs to similar immunological repertoire and limited generation of novel Ab specificities resulting in limited Ab diversity and adaptation to newly exposed antigens.

In summary, findings by Henry et al., suggests that targeting improved Ab affinity and maturation in germinal centres should be one of the goals of improved influenza immunity due to vaccination.