GET OUR MONTHLY NEWSLETTER
Immunopaedia > Breaking News > Immunodiagnostic of onchocerciasis: do we have the right tool to end the game?

Immunodiagnostic of onchocerciasis: do we have the right tool to end the game?

Onchocerciasis (river blindness) is responsible of caused considerable suffering and deformability leading to negative social consequences and economic loss (READ MORE). In fact, the disease is caused by the nematode worm Onchocerca volvulus. Adult worms live in subcutaneous nodules and release microfilariae (Mf) that migrate through the skin. Host inflammatory reactions to Mf cause severe morbidity including skin damages, and visual impairment that can lead to permanent blindness. Estimations showed that 14.6 million individuals had onchocerciasis skin damages and an additional 1.1 million visual loose. Fortunately, the elimination of this serious public health threat is possible through mass administration (MDA) of ivermectin (IVM) an anti-filaricidal drug. 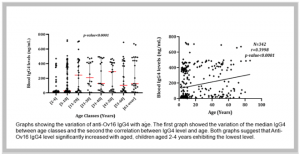 Indeed, onchocerciasis control mainly relies on MDA of IVM at regular basis to endemic population, with at least a treatment coverage of 80%, to interrupt and eventually suppress the life cycle of the parasite. Since 2012, the paradigm of onchocerciasis has shift from control to elimination. This goal of elimination highly depends on a reliable and point-of-care diagnostic test to monitor and evaluate MDA activities. In its recent guidelines for evaluation of onchocerciasis transmission interruption, the World Health Organization (WHO) recommends though with low evidence of certainty serological testing in children younger than 10 years old. Ov16 serology testing consist of detecting IgG4 antibodies produced against the specific O. volvulus antigen Ov16. However, despites the wide use of this serologic biomarker, very few is known about its association with parasitological indices of onchocerciasis, age, gender and IVM intake. 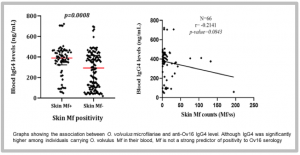 In a recent study published in Plos NDTs, a team from the Centre for Research on Filariasis and other Tropical Diseases (CRFilMT) collected samples of individuals living in a highly endemic focus in Central Cameroon where more than 20 years IVM has been administered. From the 342 collected samples, 80 were positive for onchocerciasis based on microscopic observation of O. volvulus Mf in skin samples. The presence and concentration of IgG4 antibodies recognizing Ov16 antigen were determined by ELISA using a commercially available Standard Diagnostic anti-Ov16 IgG4 ELISA kit and recombinant human anti-Ov16 IgG4 standards panel AbD19432. The authors then compare IgG4 antibodies concentration taking age, gender, Mf status and IVM intake history as covariate.

The authors reported an increase in the blood level of anti-Ov16 IgG4 with age; children aged 2 to 4 years old exhibiting a poor immune response to Ov16 antigen. Surprisingly, anti-Ov16 IgG4 level was higher among individuals who reported having take IVM treatment at least once (independently of the number of treatments received) compared to IVM-naïve participants. Also, despites no correlation was found between Mf counts and IgG4 concentration, individuals harboring O. volvulus Mf were more likely to have high level of anti-Ov16 IgG4. 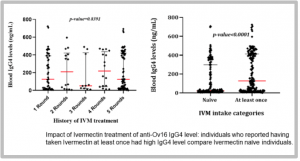 As conclusion the authors written in their own words: “Our results revealed moderate positive and negative agreements between parasitological and immunological parameters of onchocerciasis infection after several rounds MDA. Anti-Ov16 IgG4 levels increased with age but decreased with microfilaria counts, suggesting a variation of anti-Ov16 IgG4 as a result of constant exposure and accumulation of infection. This brings evidence sustaining the use of Ov16 serology in children as evaluation tool. However, additional investigations are needed to further reshape the appropriate age range among children aged <10 years old”.