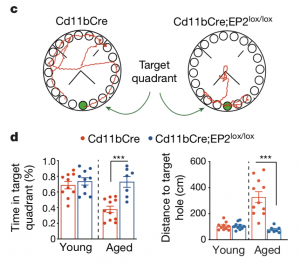 Metabolic dysfunction of innate cells contributes to the pathology of autoimmune disorders such as diabetes. Recent studies on immune ageing suggest that ageing macrophages have dysfunctions in glycolysis and mitochondrial oxidative phosphorylation. This dysfunction could contribute to pro-inflammatory responses associated with neurodegenerative ageing disorders. Minhas et al. investigated whether an increase in Prostaglandin E2* (PGE2) is associated with the development of age-associated maladaptive inflammation and cognitive decline. They focused their research on PGE2 because levels of PGE2are increased during neurogenerative diseases and in monocytes from individuals over 65 years compared to younger individuals (< 35 years).

Using in vitro and in vivo mouse models, researchers demonstrated a role of PGE2 in neurogenerative disorders. PGE2 signalling via its receptor EP2* decreased glycolysis in human monocyte-derived macrophages which was associated with dysfunctional pro-inflammatory activity. They showed that inhibiting EP2 blocked PGE2 signalling and restored hippocampal plasticity and memory function in aged mice. This favourable cognitive function was mediated by a shift in metabolic state, specifically the normalisation of glycolytic activity in aged cells to that in range with younger cells. Further, it demonstrates that pathology associated with neurogenerative disorders is not absolute and can be reversed, thus highlighting a potential target for immunotherapeutic intervention.

Researchers concluded that: “Inhibition of EP2-dependent changes in myeloid metabolism may represent a new approach to disorders of ageing, with greater specificity than the use of non-steroidal anti-inflammatory drugs that target COX-2 and COX-1 and suppress both beneficial and toxic prostaglandin signalling pathways.”

*PGE2 is a major modulator of inflammation that signals via binding to EP1-4, however researchers focused their signalling analysis on EP2.