This year the IUIS-FAIS Immuno-Ethiopia course co-sponsored by the IUIS, FAIS and Volkswagen Foundation took place between 23rd-29th of February in Bahir Dar, Ethiopia. The theme of this meeting was Neglected Tropical Diseases and Malaria challenges in Sub-Saharan Africa. Over the next few weeks, we shall highlight rapporteur reports of talks conducted at the course.

Our first Immuno-Ethiopia highlight is on talks by Dr Yaw Bediako (PhD), WACCBIP, University of Ghana, about “Immunity to malaria’’ and “Exploring naturally acquired immunity to malaria: Systems Immunology and Human Cohort Studies”. He highlighted the global malaria burden emphasizing that Africa contributes to 75% of this burden. 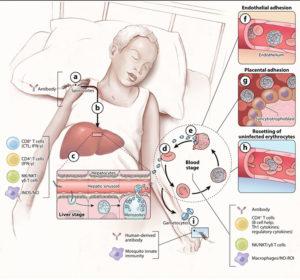 Figure 3: (a) When the sporozoites are injected into the skin the infection is clinically silent and diagnostically inaccessible, and there is no evidence for naturally acquired immunity. In this case, the only known immune effectors that can reduce or block sporozoites in the skin are antibodies. In mouse models, some sporozoites enter draining lymph nodes from the skin, where they are presented by dendritic cells and prime CD8+ T cells. On the other hand, the highly motile sporozoites go to the liver, traverse Kupffer cells, and invade a small number of hepatocytes (b). In humans, the infection continues to be clinically silent at the liver stage, and sterilizing immunity is not naturally acquired. However, in humans and in mice, immunization with attenuated sporozoites induces sterilizing immunity that appears to rely on adaptive CD8+ and CD4+ T cells; on the innate production of inducible nitric oxide synthase (iNOS) and nitric oxide (NO); and on natural killer (NK) cells, NKT cells, and γδT cells. (c) Approximately one week after hepatocyte invasion, merozoites exit the liver into the bloodstream and begin a 48-h cycle (d) of red blood cell (RBC) invasion, replication, RBC rupture, and merozoite release (e). Clinical symptoms of malaria occur only during the blood stage and can begin as early as three days after the release of merozoites from the liver. Inside RBCs, the parasite dramatically remodels the RBC, a process that involves exporting variant surface antigens (VSAs) such as P. falciparum membrane protein 1s (PfEMP1s) to the RBC surface. VSAs act as receptors for a variety of endothelial cell ligands and mediate binding of infected RBCs (iRBCs) to the microvascular endothelium of various organs (f), allowing parasites to avoid splenic clearance. However, the sequestration of iRBCs in the microvasculature promotes the inflammation and circulatory obstruction associated with clinical syndromes of severe malaria, including cerebral malaria with iRBC sequestration in the brain and pregnancy-associated malaria with iRBCs in the placenta (g). VSA-mediated rosetting of iRBCs to uninfected RBCs may also contribute to disease (h). Coincident with the rupture of iRBCs and the release of merozoites and various parasite products are inflammation and the clinical symptoms of malaria. Both adaptive and innate immune responses are readily detected. The key immune effector at this stage is antibody. CD4+ cytokine-producing T cells also play a role as do NK, NKT, and γδT cells and macrophages through the production of NO and iNOS. A small number of blood-stage parasites differentiate into sexual gametocytes, which are taken up by mosquitos in blood meals (i). In the mosquito, innate immune mechanisms serve to control parasite development. Immunization of the vertebrate host with proteins expressed by the parasite in the mosquito host results in the production of antibodies that are taken up by the mosquito with the blood meal, block parasite development, and consequently transmission [adapted from Peter D. Crompton et al, 2014]

Dr Bediako began his talk by discussing the life cycle of the parasite, host immune responses at different stages of infection. Adaptive immunity plays an important role in malaria infection, he briefly discussed the role of antibodies in reducing motility, clearance of parasites and blocking transmission. Further, he highlighted the importance of high circulating antibody titers to prevent and control infection. To illustrate his point, he explained that though the RTSS vaccine elicits high antibody titres. These titres decrease rapidly and could be one of the reasons for low protection observed in clinical trials. Cellular immunity also plays an important role in anti-malarial immunity, in the liver, host immunity is (CD8+) T-cell mediated. However, this response is inadequate due to low levels of continuous stimulation CD8+ T cells during the liver stage, which may be important for maximum protection. He also explained the role of schizonts in various clinical manifestation owing to inflammatory cytokines (IL-1β, IL-6, IL-8, IL-12 (p70), IFN-γ, and TNF) in the blood stage.

Dr Bediako briefly discussed the importance of natural immunity in protecting individuals from repeated Malaria episodes. Individual variation in susceptibility between exposed and non-exposed groups and across different age groups was noted. Further explanation was given on how continuous exposure to infection affects the expression of different cells (B-cells, T-cells, atypical MBCs and classical MBCs) and optimum immunoregulation. He described research that showed that continuous parasitic exposure increases the level of short-lived and long-lived plasma cells compared to unexposed individuals. He also described findings from the Systems Immunology for malaria susceptibility (SIMS) study that utilised samples from children living in endemic areas (Kenya). The study demonstrated that cohorts of children from coastal regions had a skewed increased malaria incidence, where some children experienced more episodes than would be expected. This suggests differences in host susceptibility and/or ability to acquire immunity (Ndungu et al, BMC Med 2015). He further discussed findings from a longitudinal cohort (weekly visits over approximately 8 years) in older children (~8 years old) who were malaria naïve, had low or high exposure. Results from the study show that hierarchical clustering distinguishes low and high exposure in the children  (Bediako et al., BMC Med 2019). In a subsequent study (SIMS 2.0) from 2015-2018, they found that exposure to malaria significantly alters the ‘steady-state’ immune system in children. Whole-blood transcriptomic approaches were sufficiently robust to distinguish between healthy children with different levels of exposure.

In summary, talks conducted by Dr Bediako highlight the complexities associated with malaria, specifically the different stages of infection and immune responses associated with them. He further described results obtained from studies on children, and the importance of studying natural immunity in groups majorly affected by the parasite.