IUIS-ALACI-ACAAI Immuno-Colombia 2021 course took place remotely between 5th to 16th April. The theme of this meeting was “Mechanisms and Approaches to Immunotherapy for Cancer and Chronic Inflammatory Diseases”.  This article highlights a talk by Professor Carla Rothlin: An introductory overview of immunotherapy. 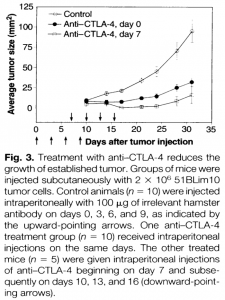 Professor Rothlin began by giving a brief history of cancer immunotherapy, starting with the first documented description of the tumour immune infiltrate by Virchow in 1863. She then highlighted the discovery of Coley’s toxin, a combination of heat-killed streptococcal bacterium and Serratia marcescens, in 1898 by William Coley used to treat malignant tumours. However, immunotherapeutic use of use Coley’s toxin was discontinued due to limitations such as no standardised protocol for the production and administration of Coley‘s toxin, and induction of heterogeneous immune responses that did not always lead to anti-tumour immunity. These keys factors and the identification of immune cells over the last century has enabled the development of many cancer immunotherapies that target specific immune cell functions. 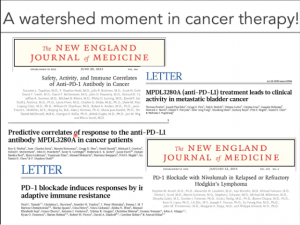 She presented data that showed that administration of anti-CTLA-4 in mice after injection of 51 Blim 10 tumour cells induced a reduction of tumour size and was associated with robust tumour control. This study illustrated that T cells are a potential target for anti-tumour therapy. Additionally, research led by Gordon Freeman and Tasuku Honjo showed the critical role of inhibition of PD-1 by its ligands PDL1 and PDL2 results in the negative regulation of T cells responses in cancer immunotherapy. However, the main inconvenience with using these T cell response inhibitors is the high heterogenicity in their ability to control tumour growth. 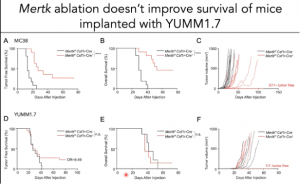 Other immunotherapies currently being tested target dendritic cells and macrophages using immune checkpoint inhibitors such as TYRO3, AXL and MERTK. Prof Rothlin presented data from her research group that showed that tumour infiltrating macrophages in YUMM 1.7 (Yale University Melanoma model) and MC38 (colorectal cancer) models express MERTK. She then demonstrated that MERTK ablation significantly improved the survival of MC38 mice by limiting tumour growth but not YUMM 1.7 mice. Differences in response rates between the two cancer models were attributed to (i) the low level of inflammatory macrophages and (ii) lower proportions of proliferating monocyte and  Batf3+ dendritic cells in the YUMM 1.7 murine model compare with MC38 mice. Thus, demonstrating that anti-tumour immunotherapy based on MERTK inhibition is not effective against all cancer types. This further highlights one of the major limitations of current anti-tumour immunotherapies. She also provided evidence that demonstrated that CD8+ T cells are required for a successful anti-tumour response, while CD4+ T cells are dispensable. 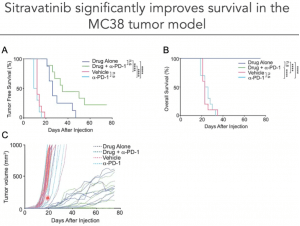