Through the use of  in vivo phenotypic analyses, Adeniji identified that Siglec-9+ CD56dim NK cells, during HIV infection, exhibit an activated phenotype with higher expression of activating receptors and markers (NKp30, CD38, CD16, DNAM-1, perforin) and lower expression of the inhibitory receptor NKG2A, compared to Siglec-9– CD56dim NK cells (Figure 1). 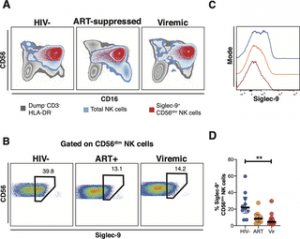 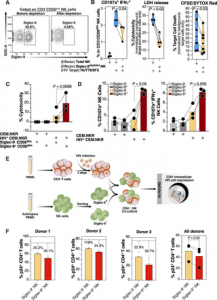 In short, the team discovered that the infected cells can take advantage of this inhibitory connection to evade immune surveillance. They then investigated whether they could interfere with this interaction/connection. The researchers identified and developed a sialidase conjugate linked to HIV antibodies (Figure 3) which was an effective approach towards manipulating the interaction. This antibody-sialidase conjugate only targeted sialic acid on HIV cells. This allowed immune cells to target HIV-infected cells while leaving healthy unaffected.

Figure 3: Model of how HIV bNAb-Sialidase conjugates may increase the cytotoxicity of Siglec-9+ NK cells against HIV-infected cells. Left two panels: The Siglec-9+ CD56dim NK subset has high cytolytic activity, possibly due to elevated expression of several NK activating receptors and reduced expression of the inhibitory NKG2A, compared to Siglec-9- CD56dim NK cells. However, Siglec-9 itself is an inhibitory receptor whose signaling restrains the cytolytic ability of these otherwise highly cytotoxic Siglec-9+ CD56dim NK cells by binding to Sialic acid attached to protein or lipid backbones on the surface of target cells. Right panel: Siglec/Sialic acid interactions are being pursued as an approach to enhance NK cell cytotoxicity against cancer using antibodies conjugated to Sialidase. We developed a similar proof-of-concept approach–conjugating Sialidase to HIV bNAbs–that could be used in conjunction with strategies that reactivate HIV latently-infected cells to enhance NK cells’ capacity to clear HIV+ cells (Adeniji, et al., 2021).

“…our study is the first to describe Siglec-9+ CD56dim NK cells in vivo as an NK subpopulation that can be exploited by HIV-infected cells to evade immunosurveillance. Our study is also the first to describe that this population is highly cytotoxic but is being restrained by the inhibitory marker (Siglec-9) they express (analogous to PD1 expression in highly activated CD8+ T cells). Finally, we developed a proof-of-concept approach (bNAb-sialidase conjugates) to selectively disrupt Siglec-9/sialoglycan interactions between NK cells and HIV-infected cells. This approach represents a promising, novel immunotherapeutic tool to be used in the future (in concert with latency-reversal agents or during ART-cessation) to clear reactivated HIV latently-infected cells.”