IL-25 blockade as a therapeutic strategy for asthma

IL-25 has been well documented with regards to its contribution and role in asthma. The entire role and function that IL-25 plays towards antiviral immunity is yet to be fully understood. This is especially important considering the fact that virus-induced exacerbations are listed as one of the leading causes of hospitalization and mortality in people with asthma. It is for this very reason that a lot of research focus is going into understanding the mechanisms responsible for viral infections worsening asthma. In line with this, is the need unpack the causes of inadequate antiviral immunity in asthma and how this influences disease progression and severity.

The work in this paper stems from the authors putting up a hypothesis of IL-25 directly regulating bronchial epithelial cells (BEC) innate immunity  during viral infection and that inhibition of IL-25 would lead to increased IFN expression and reduced viral load.

To determine the role the role that IL-25 plays in antiviral immunity, the authors made use of an IL-25 monoclonal antibody that was used in both an in vitro and in vivo model of viral infection with asthma.

In figure 1, the authors show results from looking at human endobronchial biopsies and differentiated primary human BECs from both healthy donors and patients with asthma. They determined that IL-25 and IL-17RB expression was predominantly located on the apical, luminal mucosal surface of the airway epithelium and that infection with rhino virus (RV) increased both IL-25 gene expression at 2- and 4 days post-infection, but also cell associated IL-25 protein. 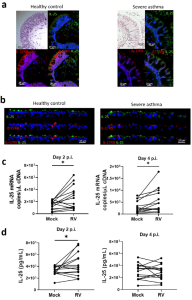 In figure 2 we see results from the authors making use of Nanostring immune transcriptomics to determine the effect that IL-25 blockade had versus the isotype control antibody. The two distinct patterns in gene expression that came up were an up-regulation in genes involved in innate immunity and downregulation of type 2 immune responses. With innate immunity, there was a striking upregulation in type I and type III IFN genes in individuals that had asthma. The authors also report that IL-25 blockade increased the anti-viral response of human coronavirus 229E-infected BECs. 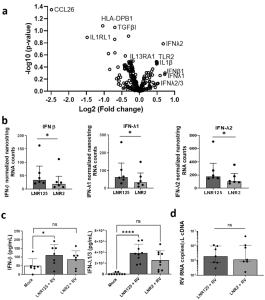 IL-25 does seem to be one major influencer of exacerbated asthma in the presence of viral co-infection given the evidence that points to IL-25 blockade enhancing IFN-secretion, reducing viral load in allergic mice plus mice with RV-induced exacerbations, reducing type-2 airway inflammation and enhancing overall anti-viral immunity during viral exacerbation of allergic airways disease.

The authors do confidently report about how ground-breaking their work was in that it would be the first study to provide evidence of a therapeutic anti-IL-25 mAb enhancing anti-viral immunity in the epithelial airway. This would ideally point to IL-25 blockade being of benefit in cases where asthma has been exacerbated by the presence of viral asthma infections. What is even more exciting is the dual effect of this therapeutic target that not only blocks type 2 inflammation, but also promotes anti-viral immunity.