Seven transmembrane receptors (7TMRs) which are more commonly known as G-protein-coupled receptors (GPCRs), constitute a large family of cell surface proteins which are reported to be involved directly in all major physiological processes. Highly conserved in terms of transducer coupling across the family, agonist activation results in the coupling of heterotrimeric G proteins followed by phosphorylation, primarily by GPCR kinases (GRKs), at multiple sites, and subsequent binding of β-arrestin 1 and 2 (βarr1 and 2; also known as arrestin2 and 3). Through years of work it has become possible to design ligands that promote preferential coupling to one of these transducers leading to biased signalling, despite the existence of natural ligands that induce both G protein and βarr coupling to these receptors. Biased agonism as it is termed, may lead to the development of new therapeutics for minimizing the side effects exerted by conventional GPCR-targeting drugs.

In a recent paper published in Molecular Cell, researchers, Pandey, et al., have identified key molecules within the immune system that have the potential, through their use, to combat inflammation implicated in chronic diseases including sepsis, COVID-19, stroke, heart attacks, cancers and brain illnesses. The researchers investigated the “complement system,” i.e. the part of the immune system responsible for the body’s natural response to pathogens and injury. Due to the ability to modulate and regulate immune and inflammatory response, C5a receptor subtype 2 (C5aR2), has been identified as a potential therapeutic target for treating chronic disease. C5aR2 instead relies on signal regulating proteins known as β-arrestin proteins. They investigated the interactions between the C5aR2 and β-arrestin proteins, and screened for molecules that lead to the activation of the connection between the two. (Read more about complement system and implications in other diseases: The role of complement in COVID-19 pathogenesis, Hijacking complement by Plasmodium falciparum, The role of the complement system in cancer).

They aimed to characterise the pairs, CCR2-D6R activated by a common chemokine ligand, CCL7, and C5aR1-C5aR2 that share complement C5a as their native agonist. They discovered that D6R and C5aR2 do not couple to any of the common G proteins but robustly recruit βarrs, they have differential dependence on GRKs, activate a broad spectrum of potential signaling pathways, and impart distinct conformational signatures on βarrs compared to their prototypical GPCR counterparts. D6R and C5aR2 was established as βarr-coupled 7TM receptors in addition to being noted as a foundation on which to discover additional examples of naturally biased receptors, and to better understand the intricacies of biased agonism and 7TMR signaling.

“…our study establishes D6R and C5aR2 as ‘‘arrestin coupled receptors’’ with a lack of detectable G protein coupling and potential signaling through non-canonical pathways. Moreover, we also establish that βarrs adopt distinct conformations upon interaction with these receptors compared to their prototypical GPCR counterparts, which highlights the conformational diversity of 7TMR-βarr complexes. Our findings underscore distinct functional capabilities of 7TMRs, and they have broad implications to better understand the framework of biased agonism at these receptors.” Figure 1 represents the graphical abstract of this mechanism. 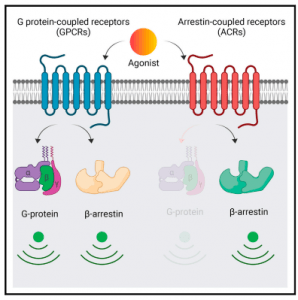