MAIN NAVIGATION
GET OUR MONTHLY NEWSLETTER
Immunopaedia > Breaking News > ICOS: is it essential for Treg-IL10 expression in the colon?

ICOS: is it essential for Treg-IL10 expression in the colon? 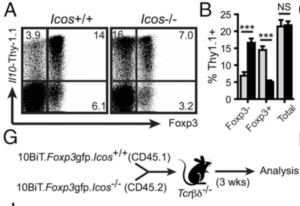 Interaction between ICOS (Inducible T cell COS stimulator) on T cells and its ligand (ICOS-ligand, ICOSL) on antigen presenting cells, has been shown to induce both pro- and anti- inflammatory T cell immunity depending on the context. In particular ICOS knock out mice exhibit low proportions of Foxp3+ regulatory T cells (Tregs), which produce low levels of IL-10 (anti-inflammatory cytokine). Suggesting an important role of ICOS in the development of Tregs.

Landuyt et al., aimed to determine the role of ICOS signalling in Treg development and expression of IL-10 in the colons of mice. As expected ICOS knock out (KO) mice compared to wild type possessed lower proportions of Foxp3+ Tregs, which were predominantly thymic Tregs (tTregs) and not peripheral Tregs (pTregs). A result highlighting the importance of ICOS in development of pTregs in the lamina propria. Surprisingly in the absence of ICOS signaling  no overall difference in total expression of IL-10 in the colon were observed. However, the source of IL-10 were predominantly Foxp3- CD4 T cells and not Foxp3+ Tregs. Indicating induction of compensatory immune effects that ensure sufficient expression of IL-10, maintaining the overall homeostasis of the gut.

Tregs are essential for dampening autoimmune pathology during inflammatory bowel syndrome. Profiling of methylation site of the FoxP3 gene, showed that ICOS signalling imprints methylation of the region, allowing transcription. However, this imprint is transient and cannot rescue the overall low proportion of pTregs in the colon, when ICOS KO T cells are transferred to Foxp3+ KO mice background. Additionally, transferring of ICOS-KO Tregs does not reverse inflammation and pathology during ongoing colitis. Highlighting the importance of ICOS-induced IL-10 expression by Tregs in dampening autioimmune responses in the gut prior to onset of symptoms.

In summary Landuyt et al., illustrated the importance of ICOS signalling in retaining the overall pool of pTregs and expression of IL-10 during pathological autoimmune responses. Additionally, it further highlights the role of CD28 and B7 family interactions in development of specific T cell phenotypes.