Macrophages are a key element of the both the innate and adaptive immune response to TB and they can differentiate into M1 and M2 phenotypes based on the cytokines present within their microenvironment. Polarization, particularly to the M1 macrophage phenotype, however, has been looked at more as driving better microbicidal capacity. The authors believe that this may be driven by M1 macrophages possibly expressing innate immunity regulatory genes and gene clusters (Inregs) and therefore sought to delve more into the transcriptional profile of both M1 and M2 macrophages in order to uncover this.

An examination of human peripheral blood and cord blood-derived macrophages, polarized to M1 and M2 phenotypes, showed that they differentially regulate the growth of intracellular Mtb through nitric oxide and autophagy (Figure 1). Differing levels of nitric oxide, reductive oxidative species and autophagic sorting of mycobacteria were taken to account for the Mtb-inhibitive state in M1 macrophages versus Mtb-permissive states in M2 macrophages. 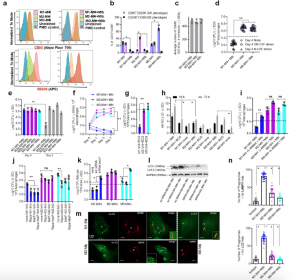 Mtb infection was demonstrated to induce the upregulation of more innate immunity regulatory genes in M1 macrophages in comparison to M2 macrophages, and this allowed M1 macrophages degrade Mtb better.

It was also found that Mtb-infected M1-macrophages secreted several proinflammatory cytokines and showed increased gene and protein expression of CC- and CXC-type chemokines in comparison to infected M2 macrophages. These data would suggest that during the formation of granulomas, the dominance of M1 macrophages, along with the presence of a predominantly proinflammatory environment work in concert to establish dynamic recruitment of immune cells which contributes an immune response that more effectively controls TB.

Through the strong upregulation of multiple genes associated with the autophagic sorting to autophagolysosomes (APLs) within M1-infected macrophages, this work highlights one pathway that accounts for many TB-exposed humans being able to resist active TB disease. Some of these genes could ideally have potential to be used as possible targets for vaccine development, diagnostics or even therapeutics.